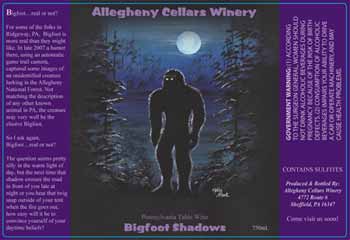 Allegheny Cellars Winery makes an interesting bottle of wine called “Bigfoot Shadows.”  This wine was directly the result of bigfoot sightings and the Jacobs Photos which were taken not far from the winery location.

Here’s what the winery itself says about its product:

Back by popular demand is our original Bigfoot Shadows wine.  It has a nice grape aroma and taste, just like fresh grape juice. We named it Bigfoot Shadows in tribute to the creature sighted lurking around the Allegheny National Forest last fall.  You may have seen the photos on the news or on the Internet.  A hunter near Ridgway, Pennsylvania, captured some images on an automatic game trail camera, which sparked yet another Bigfoot debate

The Game Commission claims it’s a bear with mange disease. The Bigfoot experts claim it is an adolescent Bigfoot.  Me?…well I’ve seen a lot of bears in my day and I can tell you that the creature in those photos doesn’t look like any bear I’ve ever seen. Is it a Bigfoot? Who knows? But it certainly looks like some kind of ape/chimp.

While recently attending the Ridgway Tasting in the Wilds Wine and Beer Festival, I had another person tell me he saw the same creature two years ago. He said it crossed the road in front of his car, and he could see clearly that it was not a bear.  He was reluctant to say anything until the photos surfaced in 2007.

I know it seems pretty silly to think there might be a Bigfoot roaming around the Pennsylvania woods. But I’ll bet if you’ve seen the photos and then find yourself camping in this area when night falls, it won’t seem so silly then.

Whether you believe or not, try Bigfoot Shadows because we believe you’ll enjoy it!

If you find yourself in the neighborhood on a Bigfoot Road Trip, drop by and buy a bottle or two (or three or four) of this special wine.  Tell them Cliff Barackman sent you!

Back to the Bigfoot Road Trip map