The Pine Barrens of New Jersey is a coastal plain thickly covered with forest. The soil is generally good for agriculture, so despite the proximity of major population centers, it has remained rural and generally undisturbed over the centuries. The popular myth of organized crime burying their victims in the Pine Barrens is a testament to the region’s remoteness, and so is the presence of a mythological creature called the Jersey Devil.

The Jersey Devil is a cryptid that has a mixture of physical characteristics including wings, cloven hooves, and a head of a goat. The creature is also commonly reported to have red glowing eyes and a blood-curdling scream. It is these two descriptions, along with the term “Devil” that directly tie the Jersey Devil myth to sasquatches. 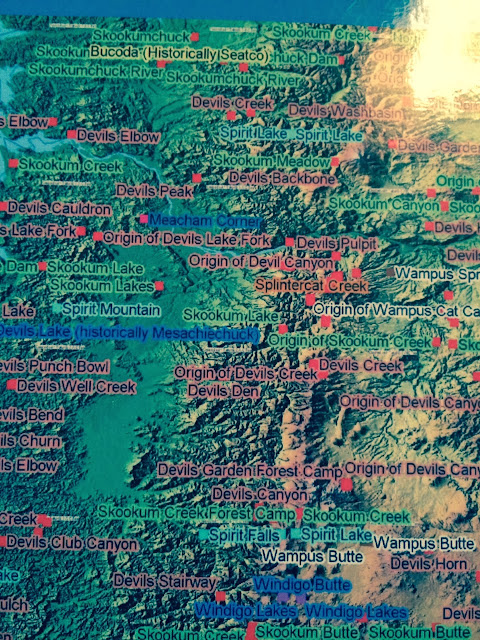 A map by Henry Franzoni of “Devil” place names in Washington and Oregon that have been associated with sasquatches.

The evidence that brought us to the Pine Barrens was a footprint cast obtained by Kyle Newhall. Kyle’s father found the footprint in the sand coming out of one swampy cranberry bog, crossing the trail, and descending into the an adjacent bog. His father called Kyle, who is an aspiring bigfooter, and he came out to investigate and cast the footprint. The weather the night before was very cold, so it seemed unlikely that the print belonged to a human, though Kyle acknowledges that the size is well within human range.

My analysis of the footprint cast suggests that despite the context in which it was found, the cast is most likely from a human. The cast shows what I interpret as a longitudinal arch, as well as a transverse arch, both of which are human traits. The fifth digit, often another indicator of the track maker’s species, suggests that the print is human because it appears close to the fourth digit and not splayed. However, the digit was not well defined, so I was unable to determine if this digit was curled under as so often is the case in human prints. These two details about the fifth digit are indicative of the track maker wearing shoes.

After the initial investigation and town hall meeting, I broke off from the rest of the group to camp in the Franklin Parker Preserve, a huge chunk of land being reverted back to its wild state after a century of cranberry farming. The preserve encompasses over 15 square miles and is home to dozens of species of mammals and reptiles, including several endangered or threatened species. I think it is fair to say that over my three days in the preserve, I saw as much or more wildlife than I did in any other location. There was no question that enough food exists to sustain a few bigfoots. Added to this plentiful food supply is the benefit of the Preserve being totally closed to human traffic after dark. I would be the only human in there, along with Tyler Bounds, my camera man.

The first night of my trek into the Franklin Parker Preserve, I was accompanied by Andy Campbell from the Huffington Post. He produced a short article and a video to go along with his trip with me. After my media obligations were over, I put in a few more hours of work before heading to bed.

The last night/early morning of my stay in the preserve, I was awakened by a very loud series of moaning howls from across the river. The first sound invaded my dreams sounding like a large piece of machinery grinding to a halt. However, I could hear the distant cranberry harvesting machinery, and this was lower, louder, and quite different. I groggily lifted my head in time to hear the second call, almost identical to the first, but now I could tell the sound’s source was organic. Each call was three to five seconds in length separated by two or three seconds of silence. They did not repeat. I quickly emerged from my tent into the rising sunlight to wake up Tyler who had slept through it all. My heart sank as I remembered that I had not set up my recorder for all night recording after the previous night’s extensive night walks… a rookie mistake, to say the least.

The last night’s investigation produced some sounds that Matt identified as not being from a coyote. Unfortunately I did not hear those sounds, so I cannot weigh in on the possible source for them. It is important to note, however, that we focused all of our efforts on the Franklin Parker Preserve because of the bigfoot calls I heard there. Ranae and I took the long walk to the other side of the water where the calls came from while Matt and Bobo stayed closer to where I had camped.

The Pine Barrens is an excellent place for some bigfoots to hang out and remain more-or-less out of view from the local humans they share the land with. My expectations of New Jersey being largely developed were shattered as I discovered that this section of the state had more wildlife than many of the other locations we had visited on Finding Bigfoot. I hope the local bigfooters do their jobs to document and share their finds with others so after species recognition the Pine Barrens can be protected for the sake of all the native wildlife, including bigfoots.