The Alaska shoot was interesting for several reasons. First of all, it was initially meant to a pilot episode for the series, and was the first to be shot. We started filming it in June of 2010, and were on scene for seven days. Enough footage was filmed to edit together a scratch version of what would later become a full episode of Finding Bigfoot. Animal Planet liked what they saw. They ordered a six-part series, and they wanted the Alaska shoot to be one of the episodes.

Fast forward to April 2011. Five full episodes of Finding Bigfoot had been filmed between February and the middle of March. The Alaska show would the the sixth. Around this time we were notified that we had to go back to Alaska to film again. So we did, and were up there during the second half of April, 2011.

When one watches this episode, it can be seen on which shoots various scenes were shot. I had a full goatee on the June, 2010 shoot, while on the April, 2011 shoot, my mustache and beard are not connected. Also visible is that fact that Bobo’s and Ranae’s hair is not quite the same. Bobo’s hair is longer, but Ranae’s hair is shorter.

The footprints that Howie Dagg found were discovered in January, 2011. Howie is the local Math teacher in Hydaburg, though he is a transplant from back east. He was walking on a logging road with his neighbor late one night when he noticed large, bipedal footprints in patches of snow as they proceeded. There were other prints of various animals in these same patches, but these impressions were nothing that either Howie or his female Native American neighbor could attribute to any known animal. Howie’s neighbor immediately identified it as the prints of a Gageet, the Haida name for hairy man, or bigfoot. She was extremely reluctant to continue up the road, but the two did anyway.

Eventually, the road became overgrown and unnavigable. Where these prints entered the impassable area, several tree branches were clearly snapped at about the seven and a half foot level, just above Howie’s grasp.

Howie's boot next to the sasquatch print.

Howie’s photographs were impressive. He included his boot in them, there was a scale item with which to work. It turns out that if we use the measured width of Howie’s boot, we could extrapolate the length of the entire footprint. Howie’s boot was 6.5 inches wide. Using this number and simple ratios, it can be determined that the print is between 17 and 18 inches long, and almost seven inches wide across the ball. The first digit (big toe) itself calculates out to be 3.78 inches long!

There is an interesting structure visible in these footprints. Along the outside of the print, there is a divot that is also seen in the 1982 Grays Harbor footprints cast by Sheriff Dennis Heryford. Please see the diagrams below.

The rock clacking that Bobo and Ranae heard were much louder than the television showed. Perhaps the broadcasted noises were not the same sounds that Bobo and Ranae heard, I’m not sure. Both Bobo and Ranae described a similar sound to smashing rocks with a sledge hammer, and it was quite loud. At first, there was suspicion that somebody on the production team had made the noises, and this possibility was looked into. It is unlikely that this is the case because of several reasons. First of all, the producers that were on the team with Bobo and Ranae were visibly shaken and quite scared about the noises. So were the sound and camera men. Secondly, we found the location of all the other members on the production team at that time, and all heads were accounted for. Lastly, one producer, who is no longer affiliated with Ping Pong Productions, told us that to his knowledge, the sounds were the real deal. He even went on to say that he was sleeping in the car at the time, which is why he was unaccounted for. This is important because he has severed his relationship with Ping Pong, and will not be working with the production company again. He has no reason to hide anything from us, and indeed might benefit from exposing a hoax.

As far as the impression that Bobo and Ranae found immediately following the rock clacking event, I don’t know what left it.  There were no toe marks, and this was the only impression they saw.  When Bobo and Ranae initially saw it, it was still filling in with water.  They were certainly only a short distance behind whatever left the impression.  Ranae stuck her foot in the muck upon her discovery of the print, and I did the same the next day when I returned to the scene for measurements.  I can come to no clear conclusions as to what left the impression.

A comparison of three impressions

Osh, the young hunter with the terrifying tale of encountering three sasquatches, had a great encounter to investigate. First of all, he was quite shaken by the encounter. On our first visit to the island in June, 2010, he actually broke down in tears when sharing his story with us. Bobo was able to talk him down a bit to help him along the way. On this past visit in April, 2011, Osh and his mother showed up in their car, but Osh refused to get out of it for quite some time. He had not been back to the area since his initial encounter, and was not very happy to be there. Again, with Bobo’s kind words and understanding, Osh got out of the car and led us towards his encounter location. At Osh’s request, we stopped a mile or two short of the actual location. It was too much for him, so we did our recreation at a different location than the one of the actual encounter.

One of several interesting aspects to Osh’s story is that the location is not far from where Howie Dagg found the large impressions in January, 2011. Since it appears that Osh saw a large male, and the footprints likely represent those of a large male, perhaps Osh saw the creature that left Howie’s footprints? Depending on the social structure and territory range of sasquatches, this is quite possible.

As usual, much of what was filmed never made it to the final cut. There were amazing helicopter rides to untouched headwater valleys rarely, if ever, walked through by humans. Ranae and I got to rappel down a 100 foot waterfall, and off-trail hikes through some of the thickest temperate rain forests in the world were filmed. The schedule was intense, but looking back at the experience, it was the coolest summer camp I’ve ever been to.

Enjoy the following behind the scenes pictures. 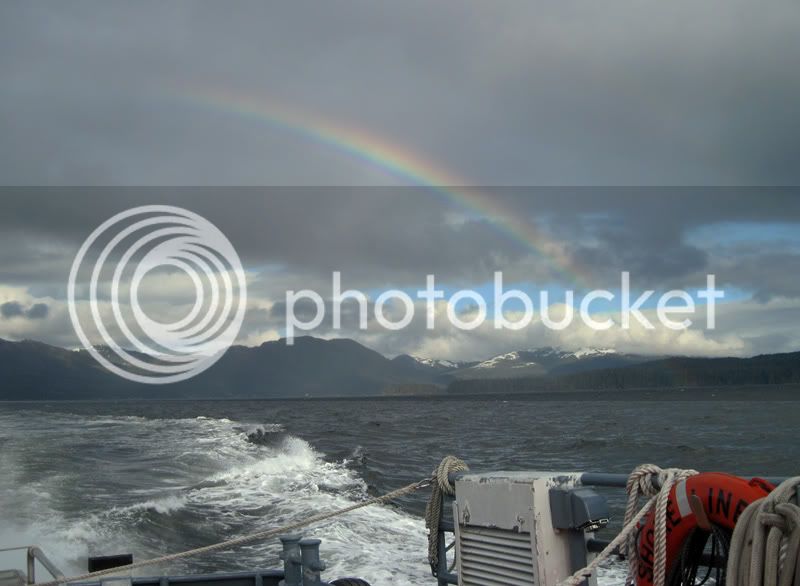 The boat ride to the island. Good weather!