I had been wanting to go bigfooting in Kentucky for some time, so when I discovered that I would finally get my chance I was elated. Years worth of rumors about the Erickson videos had made me curious about what sort of habitat would be found in the wilds of that state, and I was eager to explore them for myself.

The video that brought Finding Bigfoot to the Bluegrass State was the “Kentucky Eye Shine Video,” obtained by Charles Bowles using a Sony DCR-TRV480 camera on the night of June 14, 2008. Many more details of the circumstances surrounding this video can be read in this BFRO report. Having seen this video, but not knowing much about the location, I was looking forward to going there and doing some measurements for myself.

The film’s location was up on a ridge overlooking a well-used campground. Charles was not there alone, and a woman named Pam saw a bigfoot at that location, but in the opposite direction from the eyeshine, that very night. Pam allowed me to interview her extensively about her sighting, and I have no reason to doubt Pam’s account.  However, Charles did not catch Pam’s bigfoot on tape.  He saw and filmed something else.

The video itself only shows a dark location, a couple trees, and two glowing eyes. It was filmed in “Nightshot” mode, which is a Sony feature in many of their video cameras where an infrared illuminator is used to create limited night vision that is invisible to the human eye.  This is why the film seems to be almost in black and white.

It would be the context of the clip that would be most telling about what is in the video, so going to the site was of the utmost importance to me when determining for myself what was in the video.  What I found at the site was the video was obtained from the top of the ridge looking down the slope. There is a road at the bottom of the hill, but the two glowing eyes are not headlights, as some have suggested. They seem to be eyes, but it is unclear what those eyes belong to. 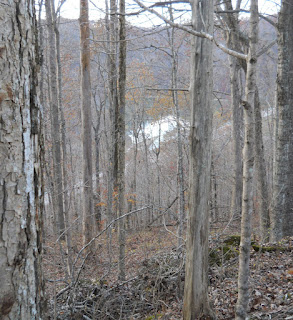 The film site, three years later, and during the day. This photo was taken from the exact same place as the original video.

There is a tree that is immediately to the left of the two glowing eyes in the video. This tree is directly next to a rock formation on the hillside. It is my opinion that the rock is the only place that the creature (if it was a sasquatch) could have been standing. If the sasquatch was standing behind the rock, it would have had to be at least 12 feet tall, and more in the range of 15 to 18 feet tall. I see this as incredibly unlikely, so I assume the sasquatch was on the rock itself. Based on our reconstruction, the eyes of the sasquatch would be at least eight and a half feet off the base of the rock. That would make this bigfoot a nine foot (or more) tall creature.

However, it is my opinion that a nine foot sasquatch would be at least three feet wide, from front to back, and possibly much wider than that. Bigfoots are often decribed as “barrel-chested,” or being as wide as they are thick from front to back. It doesn’t make sense to me that since the tree to the left of the eyes is visible, the massive body of a bigfoot standing at the same distance (and probably a bit closer because of its body’s thickness) would not be visible. The tree in question, and thus the rock on which the bigfoot must have been standing on, was only 24 feet away from the camera, and was well within the range of the infrared illuminator. 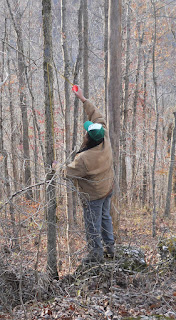 Bobo measuring the tree next to the rock where
the sasquatch would have had to be standing (in my opinion). Note that Bobo’s body is actually closer to the camera than the tree itself.

At the film site, I determined the tree next to the rock to be four inches in diameter. By counting some pixels on a still from the video, and using this horizontal measurement with a little basic algebra, it can be determined that the distance between the two eyes in the video is just under three inches. I used the centers of the two glowing eyes for this measurement. If I use the outside edges of the eyes, it only increases the distance to four and a quarter inches. I do not know the distance between the eyes of a sasquatch, but I would think that a nine foot bigfoot would have eyes a bit further apart than that. My own eyes (measured at the center of my pupils) are about 2.6 inches apart. I do not know how wide apart various owl species’ eyes are, but I would be very interested to find out. 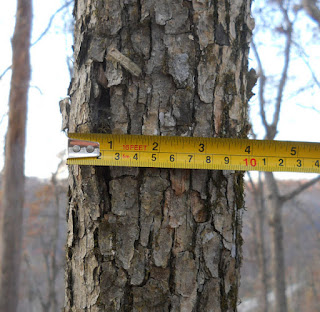 Measuring the tree in question

As I see it, in order for the video to show a bigfoot that is NOT standing on the rock, the creature would have to be well in excess of 12 feet tall. This is pretty much outside the range of all but the largest of size estimates by bigfoot witnesses. Since bigfoots of this size are either extremely rare, or their size estimates are exaggerated due to seeing conditions, distance, or fear, I see this possibility as most unlikely. If this video shows a bigfoot’s eyes that is standing on that rock, then we run into the problem of why the rest of the body isn’t visible in the film, when the tree at its side (and in the same film plane) is easily visible. It has been suggested to me that the bark of the tree is very reflective to infrared light, and sasquatches have somehow developed fur that absorbs these wavelengths, rendering them practically invisible in infrared illumination. I suppose this is possible, but I see it as pretty unlikely.

My conclusion on the film is that it probably does not show a bigfoot, though I could be wrong. I suspect that it shows the eye reflection of an owl sitting back on a branch that has broken off sometime in the three years between the filming and my on-site investigation. If I had more information about the distance between the eyes of owls, I would be a bit more sure in my assessment, but at this point, the sasquatch hypothesis seems less likely than other explanations.

But, of course, I could be wrong.  That’s part of the fun of doing these investigations.  I get to find out what could be possible, what couldn’t, and then come up with my own opinion on things.  Sharing my conclusions is simply part of the process of the scientific method called “peer review.”  If new information comes to light about my conclusions which proves my conclusion to be incorrect, it doesn’t make me a bad investigator or a stupid person.  It makes for better science.  Amateur science, I admit, but science nonetheless.