If you love bigfoots like I love bigfoots, you are always looking for things to do that might help them in some small way.  Even at this point in time, before discovery, there are many things we can do to help our hairy cousins in the woods.  Some are political, some are monetary, but most are simpler than that.

Before I get specific…  In general, as a bigfooter, anything you do should be done in a professional manner.  That involves being a positive force, whether that is in person or online.  Being negative, whether it’s trolling online, talking crap about other people, making statements that bully others, or any number of other things one can do that lack maturity makes us all look bad.  Remember, the vast majority of people who are interested in bigfoot are not part of the bigfoot community, and when they peek in on us and see bitter infighting and childish name-calling, it would probably turn them away from not only the community, but the subject itself.  Behave yourself, no matter what else you do.  If you have trouble being kind and positive, then the most important thing you can do for bigfoots is to remain silent.

I was asked to compile a list of specific things one can do to help sasquatches.  Below is a list of five simple things that one can do that would have a direct impact on bigfoots, even before their discovery.  They are simple things, with little or no monetary or personal impact.  In some ways, they are literally the least we can do without doing nothing at all. 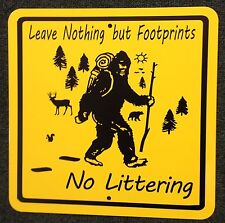 These are simple actions that anyone can perform to help sasquatches.  We are their advocates, and we should act accordingly.  Be sure to act in their best interests with a positive attitude.  Remember, what you do in public or online reflects all bigfooters.

They have no voice.  Be their voice.