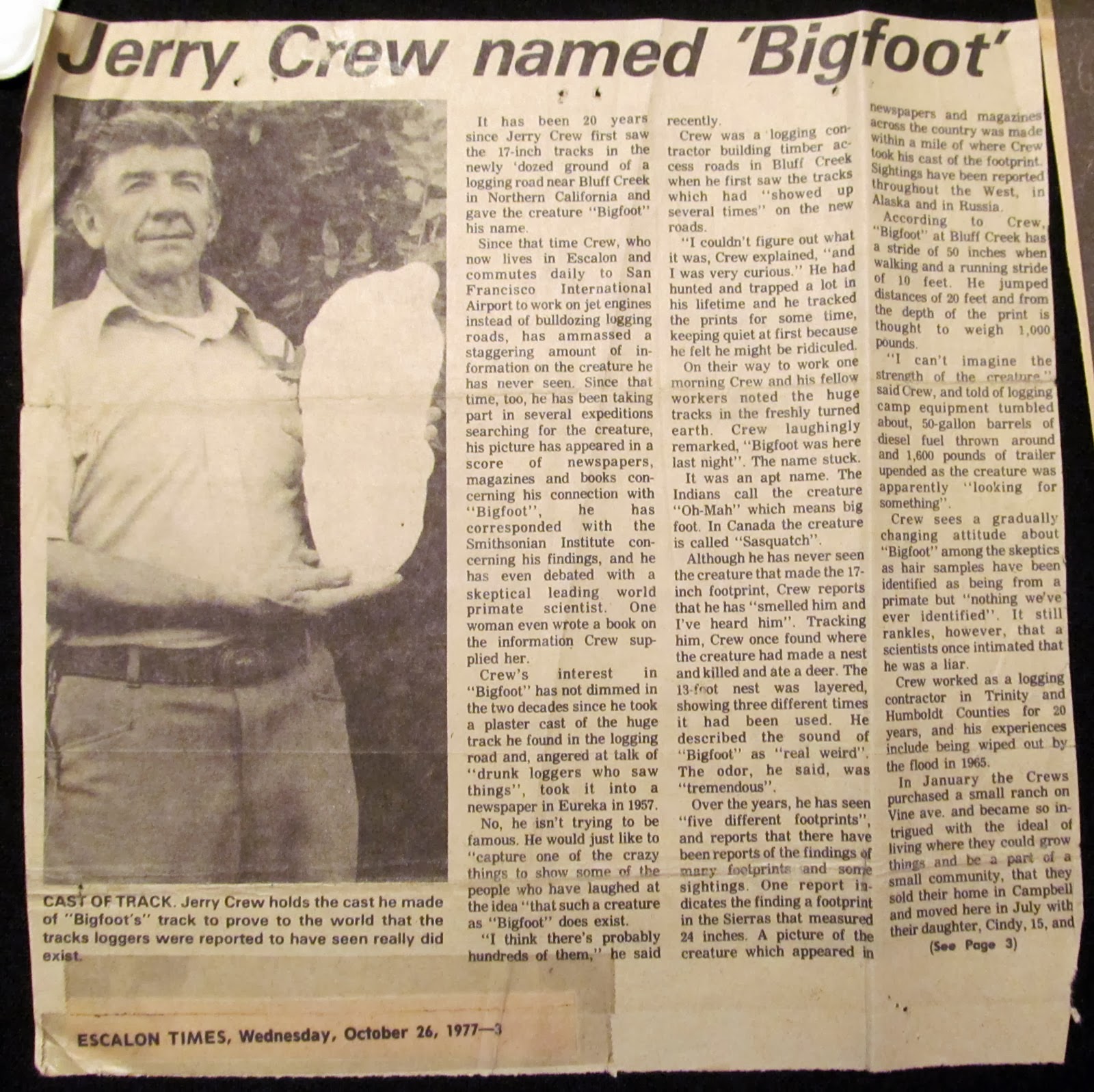 As every bigfooter probably knows, the word “bigfoot” was coined by Jerry Crew and his road building employees back in 1958 when they started finding large footprints going across the freshly torn up road they were building the day before.  Jerry and his crew were puzzled by these prints (though the Yurok natives on the crew knew what was responsible for them and started leaving the job because of it), so he consulted his taxidermist friend, Bob Titmus, who gave him plaster and directions on how to cast the footprints.  Jerry made a cast and brought it to the local paper in Eureka, and soon a newspaper story was written.  The story then spread on the AP news wire, and viola!  America had a name for that hairy biped that had been seen all over the country: “Bigfoot.”

Of course, the creatures called bigfoot weren’t invented in 1958.  Hairy wildmen have been reported in North America for as long as there have been people there.  The wildmen just weren’t called “bigfoot” yet.  The word, “bigfoot,” was first used to publicly refer to sasquatches in 1958 when Jerry made those casts and brought one to the paper.

I had always thought that “bigfoot” was the term used solely because the footprints that Jerry Crew and his men found were big.  That seemed simple enough, and there was never any good reason to question that assumption…  Until now.  There might have been another influence on Jerry’s choice of names.

Recently, I received an email from a woman named MaryAnn with a link to an episode from the 1950’s western, Death Valley Days.  The episode’s title was “Mr. Bigfoot.”  The episode is copyrighted 1956, two full years before Jerry named the creature that was making those big footprints.

Scroll to the bottom of this article to watch the full episode of “Mr. Bigfoot” from the series, “Death Valley Days.”

The episode is as corny as one would expect television to be in the mid 1950’s, and it made me smirk a number of times.  At around the 25 minute mark in the episode, Professor Muchmore starts talking about “Mr. Bigfoot.”  Muchmore explains that huge footprints measuring 18 inches long were occasionally found in the Owens Valley just west of Death Valley back in the 1860’s.  The footprints were six inches across the toes, and the stride was seven feet long when the creature was walking.  Sound familiar?

In the end, the tracks end up being a vehicle for the Professor to play Cupid, and much of what he told the protagonist about those footprints is never explained nor expanded upon.  But still, the size of the footprints, the stride, and the fact that the local Indians had a name for the creature all ring true with what we now think of as “bigfoot.”

The details and possible implications of this episode are interesting to ponder.  I wonder if the episode’s writer had some knowledge of large footprints.  Did some other person, perhaps a resident of the Owens Valley, observe footprints of this size and tell the episode’s producers or writers about it?  The Owens Valley would be a likely place for a sasquatch to live.  There are bigfoot reports to this day in the Owens Valley.  At one time it would have been even better bigfoot habitat, especially back in the 1860s when the footprints were supposedly found in this fictional story, when the valley was more lush.

And now, our feature presentation: