On January 22rd, 2011, witness Jeff was making his way to a duck hunting spot on Bull Mountain, GA. He and his buddy hiked in the back way across country, making their way to a hiking trail. When they arrived at the trail, they soon noticed peculiar footprints in the thawing ground. 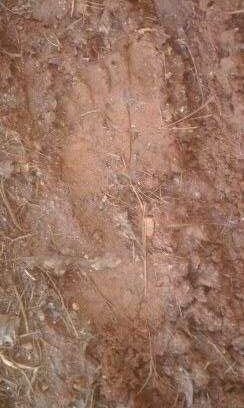 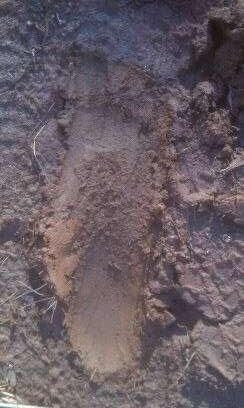 On February 16, 2011, just three and a half weeks after the initial footprint find, Ranae Holland and I met up with Jeff for an interview. He took us and the production team to the location, though we hiked in the easy way, which was still a mile or more of creek-bottom travel. With us was bigfooting production assistant, and friend of the ‘squatch, Tyler Bounds. He served us with scouting the area and keeping his eyes out for bigfooty things that the production crew wouldn’t recognize, and I wouldn’t have time to notice since I was in front of the camera so much.

We arrived at the location, not far from a marsh where there were plenty of ducks. This is a key aspect to finding bigfoots: look where there is a superfluous supply of protein. The local sasquatches were more than likely using the water fowl as their primary food item while in the area.

While we were filming a scene near the place Jeff found the prints, Tyler ran up, pale and winded. I immediately knew something was up from the look on his face. It turns out he found footprints nearby, and they reportedly showed toes! We finished the scene we were shooting, and Tyler told me the general area where they were found, but not their exact location, so the production team could film the authentic discovery moment.

The location was in the run-off at a turn in the trail. Water would run down the trail downhill to this location and spill out in this spot before going over the ledge into the ravine, or being soaked into the ground. It was this trail erosion that made this spot perfect for tracking, leaving a smooth layer of sand from the path above to record the passing of anything that went this way. It was off the trail by 20 or more feet, and hidden by debris and brush. In this one spot were two footprints, both of the right foot. The two prints led towards a steep drop off into the ravine below. The ground was covered by sticks and other forest debris except for a few square feet of sandy substrate.

Each print was measured separately, and with interesting results. The footprint measurements varied from foot to foot, which indicates that they were left by a living foot, not a fake wooden “stomper.” We only had one foot represented in the two footprints since both prints were of the right foot. The left footprint was not found in the thick forest duff. Measuring from the toes of the first print to the toes of the second gave a stride length of seven feet. This was identical to the hypothesized stride length of Jeff’s original footprints. Jeff also noted that these were just about the same size as the prints he initially stumbled on a few weeks earlier. It was entirely possible that these prints were left by the same individual and at the same time.

From the moment of their discovery until we removed the casts from the ground, at least four or five hours had passed. This amount of care should always be taken with casts. Footprints are among the rarest of hard evidence for sasquatches, and it is very possible that these print represent spoor left by the species.