On last night’s episode of Finding Bigfoot, the team and I headed to Florida. We investigated a property in the panhandle that has been reporting bigfoot encounters for nearly ten years. Bill and Carolyn Bridges were very open and gracious about having us on their property for the few days we were there. They fed us, made nightly campfires, and told us about the strange things that have been happening on and around their property for the last ten years. They were also very tolerant of us doing nighttime investigations on their property and in the adjacent forests.

Many weird things have happened on and around their property over the years. Some of these strange things could possibly be explained by a hungry bear, or at least it would appear so on the surface. Bears would definitely be capable of bending iron rods and making off with bird feeders, but I stop short of attributing them with the ability of wrapping rubber gaskets around tree stumps several times as we saw evidence of. Bears also could emit the growls that Carolyn heard outside her bedroom window that night, but the greasy handprint left on their glass window is clearly not that of a bear. Being a footprint nerd, I was particularly taken by the handprint, and I managed to get a copy of the handprint film from one of the producers. In between shooting scenes, I took measurements of various parts of the screen door on which the handprint was left. When we were filming the scene about the handprint, I told the producers that I’d like to find out how big it was, and they gave me a little time to do so, but not much. In fact, the cameras were rolling on me as I did the measurements and the math. It was a high-pressure situation, considering the price of the high-definition digital tapes that those cameras use.

Now that I’m in a much more controlled and less-stressful environment, I wanted to go back and see if I could get some more accurate measurements. In the field, I used an actual ruler to measure the size of various things on the computer screen, but now I have the luxury to count pixels. I think that everyone would agree this should give more accurate results. The first step in finding the size of this handprint is to find some scale. Luckily, the door on which the print was left was still there, so I set about measuring as many things as I could. My notes from the field accompany this report. I then exported several frames from the video into photo editing software. In the first exported frame, I used the software’s ruler tool to find that the door frame was 82.25 pixels wide. It measured 2.25 inches in real life. Using ratios to determine the approximate size of the handprint in real life, I found that the minimum measurements for the thumb length and the wrist width are 3.16 inches and 2.48 inches respectively. 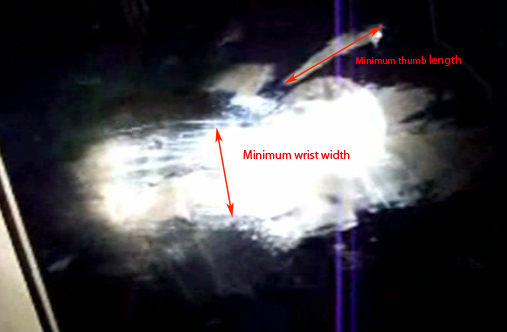 I say “minimum” length because the markings on the glass are only where the hand actually made contact with the surface. Since thumbs and wrists are generally cylindrical in shape, the full lengths and widths of them would not be expected to make full contact with the glass surface. Check this yourself by placing your hand flat on a desk or window. Look at how much of your own wrist and thumb touch the surface compared to its actual length/width. I have chosen to only give the minimum measurements because that is all that is verifiable in the photos. 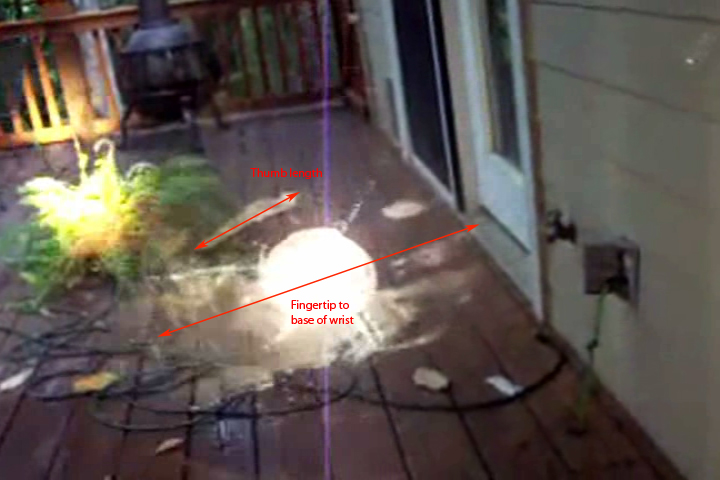 I could not use this first frame for determining the overall length of the hand, so I had to export another frame from the video in which its entire length was visible. This posed a slight complication because the camera shifted to a closer position before this frame was shot, thus skewing perspective and size of the image in the frame. To compensate for this, I took the physical measurement of the thumb length derived above (3.16 inches) and found its length in pixels. I then used these numbers in a new ratio to determine the length of the hand from the base of the wrist to the finger tips. I had to estimate where the base of the wrist was, and I judged it from the pattern of the smears left on the glass. The overall length seems to have been around 9 inches or so.

The above measurements might be more accurate than those that were determined in the field. The initial BFRO investigators did not take any still photographs, nor did they collect measurements as I would have wished. Still, this hand print video is of good enough quality from which to derive at least some approximations. I would like to encourage any prospective field researcher to always collect as much information in the form of measurements as is humanly possible from each site. You never know when some bigfoot nerd like me might be using that information to determine something interesting.