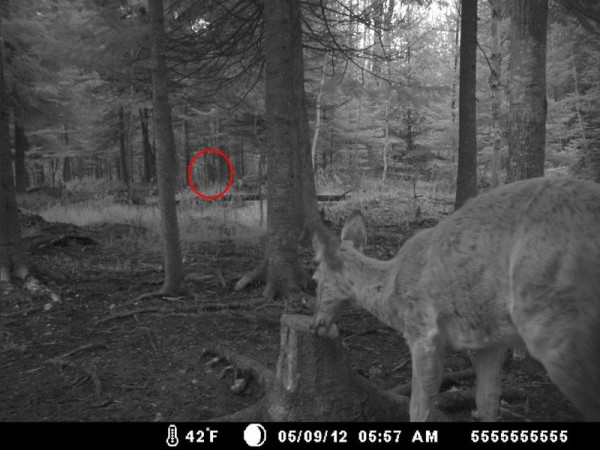 The photographs were taken by a local Yooper (as the residents of the Upper Peninsula call themselves) named Craig Sulk. He owns 80 acres adjacent to his home on which he regularly hunts. He has about ten motion-sensor trail cameras deployed throughout this property at all times to monitor the deer population and their habits.

On May 9, 2012 a camera obtained a series of three photographs taken over a two minute interval. The first photograph shows a deer sniffing a stump in the foreground. The second picture shows the same deer in pretty much the same position, but in the background is a shadowy man-shaped figure standing a distance away. The third photo has the deer looking to its left, but its ears are listening out to its side instead of the direction the deer is facing. The shadowy figure in the second photograph is nowhere to be found in the first and third photographs which means it is not a play of light and shadows, but rather something that moved into and out of frame while these three pictures were taken.

Craig says he reviews something on the order of 20,000 photographs a year, yet he has never seen a person in any of the photographs that he didn’t personally invite onto the property. There are a couple of other isolated homesteads nearby this location, but they are few and far between. Still, the fact that there are some people living nearby means we cannot totally dismiss the possibility of the figure being that of a human, however unlikely it might be. It should be noted that Craig felt it was most unlikely that someone would be on his land uninvited because of how remote the land is, as well as the fact that he would probably shoot at a trespasser.

On site measurements put the figure at 35 to 40 yards away from the camera. The comparison photographs we took of Bobo gave us a very rough estimate of the height of the figure, which we roughly determined to be around six feet. I believe that Bobo was standing a bit closer to the camera than the figure was, but even with this discrepancy the figure wouldn’t be anywhere near the size of an adult male sasquatch.

Since the figure stood at a height that is well within human range, we were not able to definitively say that Craig’s photograph shows a sasquatch. However, complicating the lives of bigfooters like myself is the fact that not all bigfoots are huge. In fact, it is my belief that female sasquatches tend to be in the 6 -7 foot range on average, which would make them exactly the size of the figure in Craig’s picture. Complicating things even more is that every 8 foot tall sasquatch at one point in its life is 6 feet tall. While it is not certain that Craig captured a photograph of a sasquatch on his trail camera, it is entirely possible.