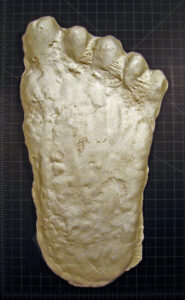 This cast was made in 1960 by Peter Byrne somewhere in the vicinity of Bluff Creek, CA. He told me at his home that he had only found two nice prints over the years, and cast one of them (one was in several inches of water). He then then showed me a photograph of the footprint (see below) and informed me that the latex mold of the cast had been given to Larry Lund of Vancouver, WA as a gift. I later obtained a copy of the cast from Lund.

Based on the shape of the footprint in the ground, it is clear from the photographs that the latex mold given to Lund is not from the print that Byrne photographed in 1960. I inquired to Lund about the discrepancy, and he was kind enough to ask Byrne about the issue. He seemed as puzzled as we were.

Despite being one of the more widely circulated casts, very little is known about it. It is not known if Peter has more notes on the finding, but a request for more information was sent.

The cast has what appears to be forest duff squeezing out from between the toes. In poor copies of the cast, this appears as webbing or stretch marks, but in first generation copies (as shown here), these markings are clearly pine needles and duff.

Along the inside of the foot, there is a possible hint of the “double ball” which is a feature found in some, but not all, bigfoot casts. This feature seems to be a flexion crease corresponding to the metatarsalphalangeal joint which lies underneath. This feature can be observed in infant humans, though most lose this feature as they mature and the foot develops. In sasquatches, this feature indicates the presence of a thick fat pad which folds and bunches up as the foot flexes.

There are impressions in the cast that suggest it was touched repleatedly with fingers.  This could have been done to sculpt the cast, but this isn’t necessarily the case.  It also might have been done to deepen the cast in the ground, to give it a more robust shape, or any other reason.  Such finger marks are not always the sign of hoaxing, but they sometimes are.  I do not know what is the case here.

This cast (or at least the footprint in the photograph) is thought to be from the same individual that is shown in the Patterson/Gimlin film of 1967. Interestingly, her footprints were found on several occasions over the years leading up to the film.