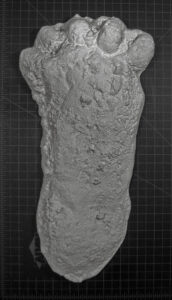 John Green gives us some information about this cast and its context in Sasquatch The Apes Among Us. He writes:

“I wasn’t back in California until 1963, by which time Tom [Slick] was dead. Bob, who had returned to visit his parent, had been shown tracks of three different sizes at Hyampom, about 60 miles south of Bluff Creek site, and I drove down to have a look. By the time I arrived Bob had made some casts, but sightseers had trampled on nearly all the tracks, leaving only a couple of 16-inch long ones. The other tracks, one 17 inches long and very wide, the other 15 inches, with widely splayed toes, were both new to all of us, but the 16-inch could well have been the original Bigfoot.”

This cast is from the individual with 15-inch tracks mentioned above. Interestingly, this particular cast measures 16 inches, but there is another track cast from this individual that measures in at the documented 15 inches. (When multiple casts from a trackway are cast, they often have different lengths due to the casting substrate, as well as the forward motion of the foot as it impresses in mid-stride.) The following photograph is of the other foot from the same trackway: