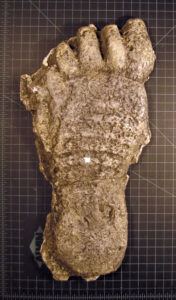 This print from October of 1988 was found and cast by Dr. John Bindernagel and his wife, Joan, in Strathcona Provincial Park near their home in British Columbia. It was left on a hiking trail, and indeed a hiker’s boot print can be seen in the cast itself.

When I first met Dr. Bindernagel in the late summer of 2007, he brought with him a number of other casts. Two other of his casts caught my attention. When I asked him about the other casts he had assumedly cast at the same time as the cast above, he told me that they were cast some 40 miles away. They were obviously from the same individual, having the same peculiar toe shape and size. Apparently this individual gets around.  See a photo of one of these casts below.