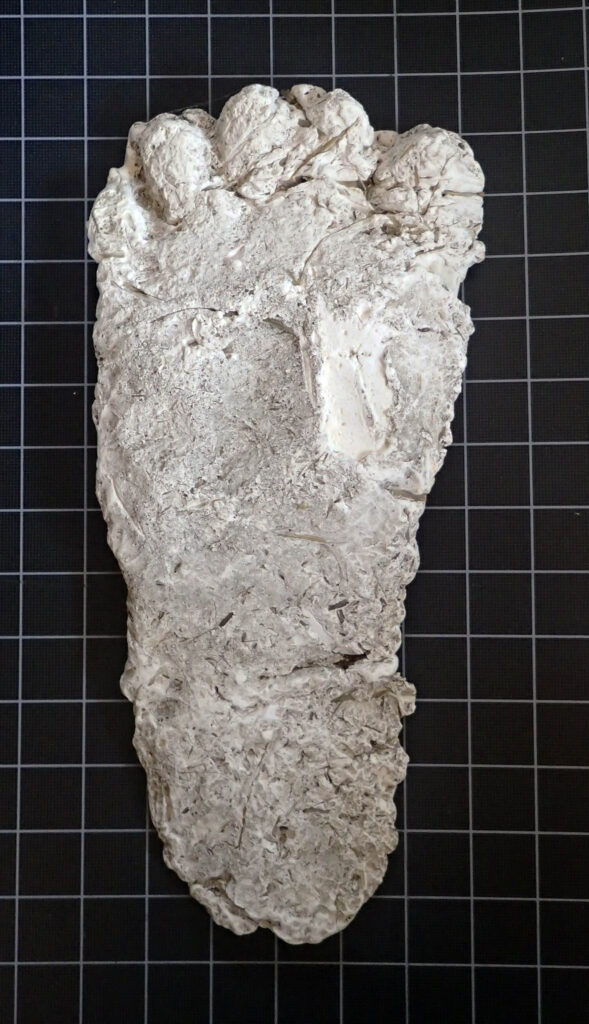 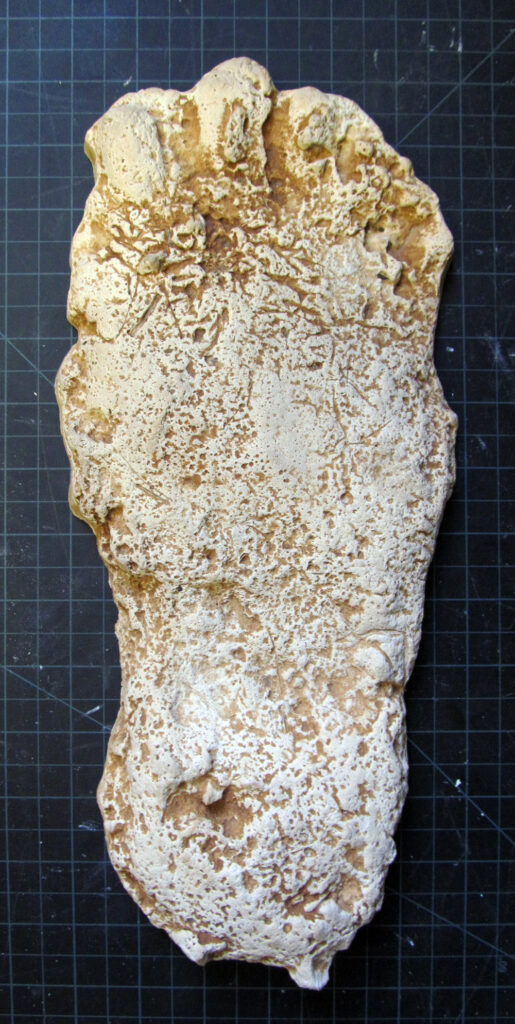 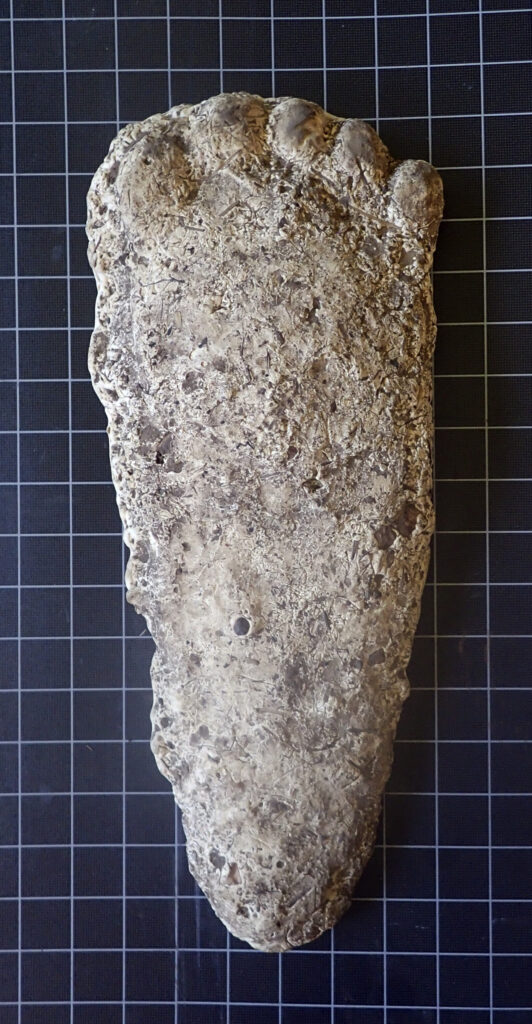 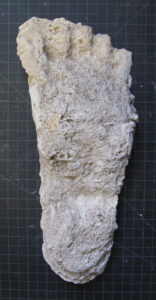 On January 14, 1991, Paul Freeman and his wife were having coffee at a restaurant when they overheard a couple guys talking about some bear prints they had seen on Mill Creek Road.  Thinking that it was too early for bears to be out of hibernation, Paul thought they could have been bigfoot tracks so he decided to investigate.  Around noon, he called Vance Orchard and invited him along, and he and Wes Sumerlin met Paul at his house to ride to the location together.  Wes was quick to point out that the unseasonably warm weather could have brought a bear out of hibernation, but the prints were still worthy of checking out.

Upon arrival several footprints were quickly found on both sides of the road.  The prints were estimated to be three or four days old.  Vance Orchard snapped several black and white photographs of prints while Paul and Wes were examining individual tracks.  One of these photographs is included in Vance’s 2001 publication, The Walla Walla Bigfoot on page 21.

The creature’s path was traced for a good distance by the three men (see diagram below).  It came out of the brush in the Five Points area (the same general area where this individual’s prints would be later cast by Dr. Jeff Meldrum in 1996) near a wheat field off of 7 Mile Road, made its way down to Mill Creek, through the grass and brush, and back up to the mountains via nearby Blue Creek.  The total distance this animal was tracked is approximately two miles.

Wes Sumerlin, who had tracked bigfoots numerous times over the previous decades, recognized this footprint.  He had named this individual “Big Jim,” and was aware of several sightings of that individual in the immediate area where the tracks were found.  As a side note, the author believes this is a track of a female individual.  I base this opinion on the size of the footprint, and the fact that the size didn’t change over the years it was found, indicating that the creature was full grown at the time it left the prints and not a juvenile of the species.

Retired Oregon Wildlife Department employee, Jim Hewkin (who is a bigfooter in his own right) came out to examine the footprints.  He spent a couple of hours around the Mill Creek/7 Mile bridge area and decided that the prints were fake.  He based this verdict on what he expected a sasquatch to do, which is tricky business in my opinion.  Sasquatches rarely conform to expectations.  Mr. Hewkin noted that when crossing over a wire fence, the sasquatch placed its foot very close to, if not underneath, the wire in the same place that Mr. Hewkin would have placed his to cross the obstacle.  I see no problem with this.  While it is known that large sasquatches seem to be able to cross obstacles without breaking stride (such as the Cripple Foot creature crossing a 48+ inch barbed wire fence), most of these reports are of very large, probably male sasquatches.  The individual in this 1991 case is a smaller sasquatch, as surmised from its notably smaller footprints (13.5 inches vs. the 17 inch Cripple Foot).  Mr. Hewkin also thought that the path the creature took along the road would not be the one a sasquatch would take.  He would expect a bigfoot to cross the creek and enter the wood line.  I guess he could be right, but I am aware of many reports when the sasquatch is in the open, alongside roads, when it could have been well-hidden in the wood line.  Mr. Hewkin’s final assessment was that the prints were a hoax made by “using cast material that was attached to usable boots.”

At odds with this opinion is that of Dr. Grover Krantz.  Quite contrary to Mr. Hewkin’s hypothesis of a prosthetic attached to boots being responsible for the prints, Dr. Krantz said the tracks showed characteristics of being made by a “moving, flexible, living foot.”

A colleague of Dr. Krantz also visited the site.  Greg May, a wilderness survival instructor at Washington State University came to see the trackway on January 25th, and again on February 1st.  May noted that there was no interruption in the trackway over the six to eight miles he followed them above Mill Creek.  Along that distance, May found hair, scat, vegetation disturbance, and a variety of substrates and terrain through which the tracks traversed.  Barring the development of some unknown prosthetic capable of displaying movement and flexibility, May stated that he was “90 percent certain that this site is valid and not fabricated.”  The other 10 percent was a margin of error in case that hypothetical unknown prosthetic material had been used.

It should be noted that on May’s second trip to the site, veteran bigfoot researchers John Green and Bob Titmus were also at the site.  It is known that John Green has a low opinion of the Freeman track evidence, and that Bob Titmus also had his doubts.  However, Titmus himself cast footprints out of the surrounding Blue Mountains that seem to hold up to scientific scrutiny.  In regards to this track find, I could find no record of either man’s opinion on the matter.

And finally, one more bigfooter had the opportunity to lay his eyes on this track find.  Phil Farnes of Bozeman, MT, a long-time Soil Conservation Service employee and wildlife photographer examined the footprints and came to the conclusion that they could not be replicated by hoaxing.  He, like others before him, was most interested in the obvious flexibility of the foot that made the print.  The step length of nearly four feet also impressed him greatly.

To hold this cast in one’s hand is a most interesting experience.  The way it is bent and twisted is beyond the ability of a photograph to convey.  Not only is the flexibility of the mid-part of the foot at the midtarsal joint very pronounced, the toes are twisted off the axis of the foot’s ball as well.  Though not impressively large, the print stands out as an excellent example of a bigfoot footprint, and one that would be exceedingly difficult to fake.