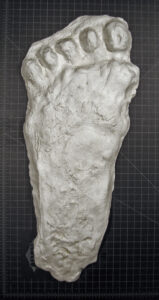 The Elkins Creek cast is well known in the bigfoot community. It is one of a small handful of casts that show what could be sasquatch dermatoglyphics, according to Jimmy Chilcutt. Dr. Jeff Meldrum is credited with finding indications of anatomical features that are consistent with those of other apes.

A farmer (now deceased) who lived on Elkins Creek called the police to report disturbances on his rural homestead. For about two weeks something had been frequenting his property. Strange noises were heard, dog food was stolen, and eventually livestock and pet dogs went missing. Whatever it was would bang on the outside of his trailer in the dead of night. When the sheriffs came to investigate, no evidence of the culprit was ever found.

Eventually, the man had his barn door ripped off its hinges when something was apparently trying to raid his corncrib. He called the authorities once again to report the vandalism. A deputy named James P. Akin was dispatched to look into the matter. Deputy Akin suspected local moonshiners were trying to discourage the man from living at the property.

The farmer told Deputy Akin that he knew what was doing the damage, and showed the officer five huge footprints along the banks of Elkins Creek. Though all five prints were clear, four of them were totally submerged in the water of the creek. One, however, was in the fine silt next to the water’s edge and was still in excellent condition. Deputy Akin cast that print, and it is pictured above.

The cast has undergone intense scrutiny by many people far more qualified than most to assess its anatomical details. When the words “bigfoot” and “Georgia” come together, a reference to this cast is often not far. It is not only one of best pieces of evidence to surface from Georgia, but is remains one of the more interesting casts in the data set.

According to a bigfoot group called West Central Georgia Bigfoot Investigation (WCGBI), the cast was obtained near Double Bridges Road. Elkins Creek is over 8 miles to the north of this road, but apparently in between these two locations are thick woods and not much else. It seems that the southern border of Pike County more or less follows the course of Elkins Creek, so it can be reasonably assumed that it was found somewhere along that stretch north of Sprewell Bluff State Park and Wildlife Management Area. 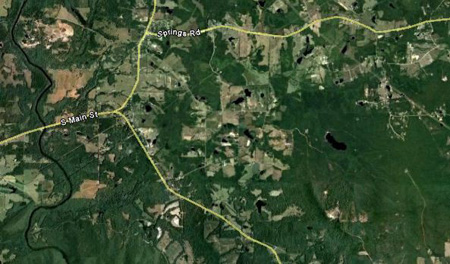 The cast’s notoriety combined with its sheer size makes it a favorite among bigfooters. The toes are well defined and deeply curled.

Bigfoot investigator Steven Hyde, a good friend of Deputy Akin, reported that the original cast was damaged in shipping after a mold was made by Dr. Jeff Meldrum.