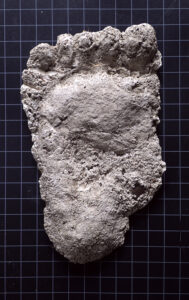 This fascinating cast’s history is largely unknown, although there is a decent chance that more information will eventually come to light.  The cast first came on my radar in the spring of 2017 at an event in San Francisco.  A friend and local law enforcement officer named Tom gave me the cast as a gift.

Tom is an avid collector of bigfoot items, everything from books to action figures, from photos to autographs.  You name it, he collects it.  At some point in the last ten years, he purchased an original cast from Ebay.  He got a digital photo of the print in the ground, which he printed out on copy paper, and a page of information on the cast.  He put the cast and the information in a tub, and it has been sitting in his storage unit ever since. 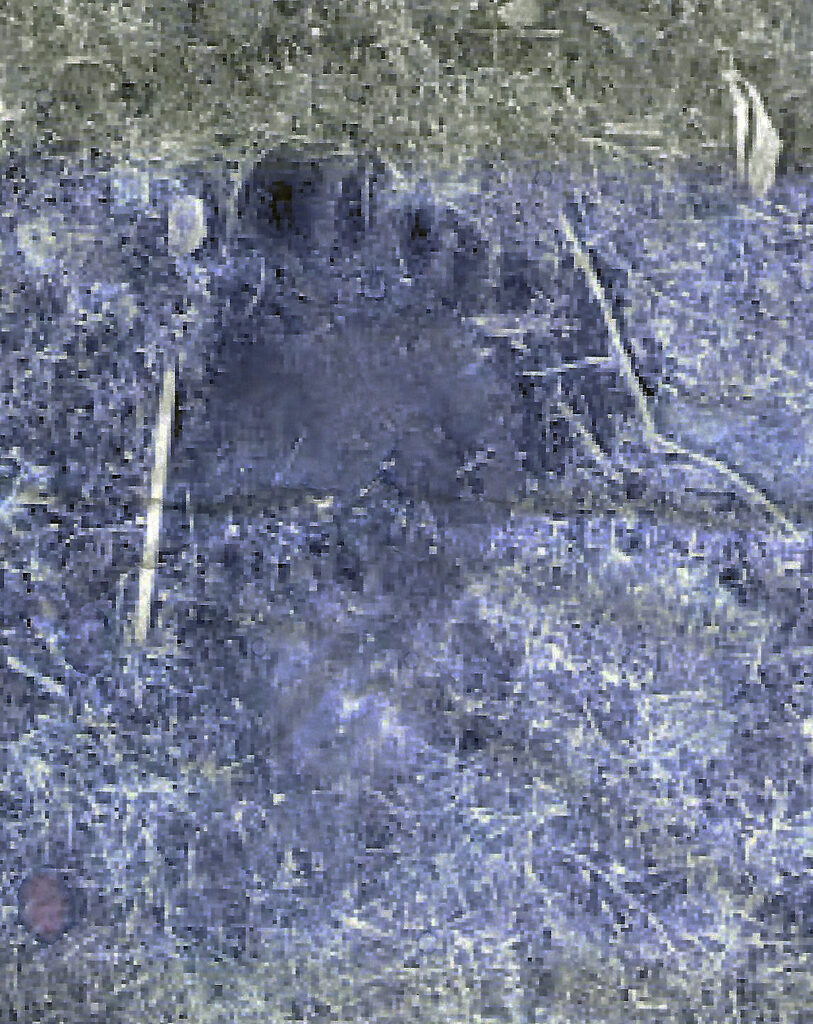 Tom has recently started lightening his load, so to speak, and decided to give the cast to me to be properly documented and added to the database.  It was broken across the toes when he handed it to me in San Francisco, and I have since repaired the cast and made a mold.

What Tom remembers is that a Canadian couple was on vacation to the Pacific Northwest.  He can’t remember if it was Oregon or Washington, but he’s pretty sure it was one of the two.  They found the print and managed to cast it.  Eventually it was sold on Ebay.

Despite the lack of available information about this cast, I think it is authentic and quite interesting.  The toes line up straight across the distal edge of the foot, which is a common configuration seen in many other casts and footprint photographs, especially when the foot is in a supinated position.  The most remarkable feature is the midtarsal ridge running right behind the ball of the foot.  The ridge is not exactly linear, and indeed is not even present along the extreme lateral side of the midfoot.  The shape of the ridge is curved along the base of what could be interpreted as the fourth metatarsal.  To me, this indicates the pressure along the base of the metatarsals was greater behind the first through third metatarsal, but this is also indicative of the lengths of the metatarsals beneath the skin; each metatarsal is shorter than the one before it (the fifth is shorter than the fourth, which is shorter than the third, etc.).  The sasquatch might have been changing directions at the time, or perhaps simply putting more force into the gait.  With only one cast and photograph, it is impossible to tell.  The straight-across toe formation supports this hypothesis, as does the bunching together of the hallux and second digit (the hallux also digs in the deepest of the five digits).  There is a flatness to the fourth digit that is not parallel to the ground that also suggests this might be true.

The lateral side of the cast where the midtarsal pressure ridge is not evident is also informative.  The foot impresses to the same depth here as it does at the heel and ball of the foot (more or less).  This seems to be indicative of the thick fat pad on the bottom of the foot.   It curves and contours nicely up to the ridge that was pressed backwards by the ball of the foot.  A fake stomper, from my experiments, would have flattened this ridge of dirt to an equal depth as the rest of the print.

Overall, this is an excellent cast that conforms well to many others in the data set. If any more information comes to light about this cast, I will update this page accordingly.