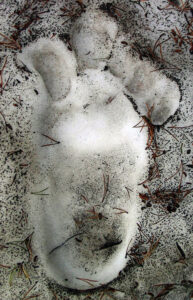 This unusually clear footprint was found by geologist and biologist, John Rittel in the Absaroka-Beartooth Wilderness of Montana.  The footprint was found in a patch of snow that hadn’t yet melted near Mystic Lake.  The trackway could be followed for more than 20 meters before it disappeared into a patch of shrubs to the south of where the above photo was taken.

At first, John took the print as being from a large grizzly bear, which are common in the area.  John has extensive field work experience (more than 30 years worth) studying bears in both Yellowstone and Glacier National Parks.  Upon closer look, John realized that there were no front paw prints of this supposed bear.  All the prints were of the type pictured above indicating the track maker was walking bipedally.

The size of the footprint was determined by a simple ratio using the pine needles in the photo which were said to be about 1.5 to 2 inches in length.  I used 1.5 inches and calculated the above length and widths.  The step length was estimated by the witness to be 1.5 meters, which I converted to inches above.

John has shown this footprint to many friends and colleagues and has received the expected heckling that goes along with finding bigfoot evidence.  He still does not know what made the print, but thought I would be interested in seeing it (and he was correct). 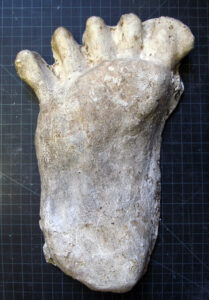 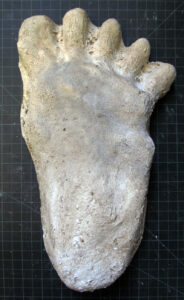