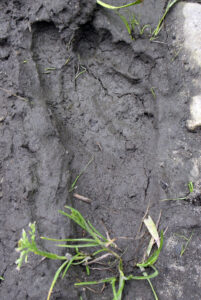 This footprint was found by the witness about 50 yards from Canaan Loop Road near Blackwater Falls State Park in West Virginia.  The area is mainly used by mountain bikers, bear hunters, and hikers.  The witness left the gravel road to do some off-trail hiking when he stumbled across this small footprint in the mud.  No information was given as to if there were others, or the step length.  The location is three or four miles away from the nearest house, according to the investigating researcher, Dr. Russ Jones.

The footprint is flat-footed in that it has no strong indication of a longitudinal arch.  The ball seems a bit more deeply impressed than the mid part of the foot, which is congruent with many other footprint casts in the data set.  There is a ridge of mud pulled up behind the third, fourth, and fifth digits, but is totally absent behind the first digit, and mostly absent behind the second.  This might indicate independent toe movement, and is thought to be the product of a grasping action of the toes as they interact with the substrate.

Though this footprint is possibly human in origin due to its size, I think it is likely a juvenile sasquatch track.  The lack of a pronounced longitudinal arch, the “peas-in-a-pod” toe arrangement, the length-to-width ratio, and the context of the footprint find all argue towards the sasquatch hypothesis.

This footprint was investigated in-person on a Finding Bigfoot episode filmed in the area.  After seeing exactly where the print was found, I am even more convinced that it was not a human print.