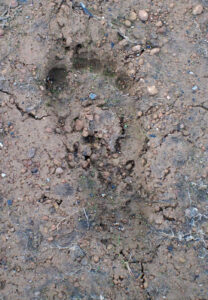 This footprint was photographed by Alex B., of Portland, OR.  He and his uncle were looking for chanterelles on Piety Island in Detroit Lake.  Below are excerpts from Alex’s emails to me:

Hi.  My name is Alex, and I have a picture of what I think is a bigfoot print.  It was taken October 4th, 2009 in Detroit, Oregon.  I volunteered with the forest service for about a year at the Detroit Ranger Station.  One day my uncle went for a walk out to Piety Island because every winter they let most of the water out of the lake.   We were about 200 yards from the island when I saw the prints in the mud.  At first I thought to myself,  “Who in their right mind would walk barefoot out here?” because of all the fish hooks, broken glass, and other hazards you would expect to see at the bottom of a lake.  But at the same time, the print is about 13-14 inches long, and there was a trail of them heading off toward the island.  I didn’t have a chance to put anything in the picture for scale.  I was being rushed by my uncle.

I remember a few people telling me that they heard sounds of what could have been a sasquatch, and I looked up old sightings online and found some that interested me.

To determine the widths of the ball and heel, I used Alex’s estimate of the foot length at 13 or 14 inches.  I calculated the widths for both 13 inches, as well as 14 inches, which is why you see two values for these measurements.

Since there is no scale visible in the photograph, I just have to trust Alex’s length estimate.  If this footprint were more in the 9 or 10 inch range, I would have to think it was human in origin.