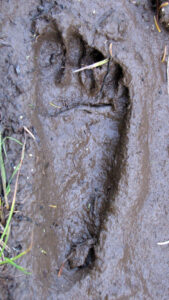 This footprint was found on September 10, 2009 around 3:00 pm (the camera was set for AM, not PM) by the witness and her husband while hiking off trail in Kootenai National Forest, located in northwest Montana. The trailhead they departed from was accessible only with a four wheel drive vehicle in low gear. The witness is a tracking hobbyist and is well-versed in the signs of North American mammals.

The terrain in this area is steep, similar to interior Alaska with tundra, bogs, swamps, grassy meadows, large mountain slides with boulders and scree, dense alpine and sub alpine forests, thick alder, and plenty of wild huckleberries. The daytime temperature was only 38 degrees, and a light snow fell earlier in the day. The elevation was between 6000 and 7000 feet.

The witnesses took some time to look for additional tracks after the initial find. They found plenty of tracks of other animals, including bear, various ungulates, wolf, coyote, and bobcat, but no other sasquatch tracks.

The witness commented that the photograph is misleading in that the print looks skinnier than it did in person. She suggested looking at the context picture to get a better idea of the width of the print.

Not convinced that this is a sasquatch track, the witness has shared her photographs professional bear trackers who also work with search and rescue who have no connection to the bigfoot world. The experts have not been able to identify what kind of animal it came from. The witness herself, living in bear country, is very familiar with both black bear and grizzly bear tracks.