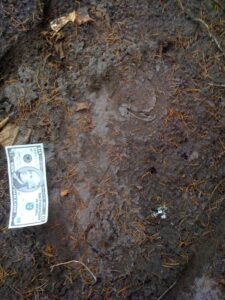 Friend and bigfoot investigator, Will Robinson, found several interesting impressions along the Sandy River just east of Portland, OR. Will was fishing with a friend on private property owned by his friend’s uncles. Using his cell phone and a $10 bill for scale, Will photographed two impressions and sent them to me for my opinion.

Only one impression was in substrate that would record details of any sort. While one photograph shows little if any detail, the other shows clear toe impressions and some information on the shape and length of what could be a footprint of a sasquatch. Using fishing line, Will measured out the length of the impression and later determined it to be a little short of 20-inches long.

I have personally taken photographs of footprints in the ground only to discover that the photograph shows almost no details compared to what I saw in person. So, when I saw the detail in Will’s photographs, I was excited and wanted to visit the location. Upon speaking to Will, I was even more excited to find that the impressions had an approximate depth of 0.25 to 0.5 inches: in other words, fully castable.

The context of the footprint find was promising, too. The surrounding forest is either private property, or a designated nature preserve. It is only a mile or two from Gordon Creek, where I investigated an excellent sighting in July of 2008.

As if that weren’t enough, last spring there was an interesting rock-throwing event that occurred less than 150 yards from where the footprint was found. Will’s fishing buddy was fishing at the nearby river beach with a few friends when out of the corner of his eye he spied a rock about the size of a man’s head come plummeting down. He turned in time to see the rock splash into the water a short distance from him. Based on the angle from which it came in, and not considering sasquatches to be real animals or even a possible source for this projectile, he and his friends judged that the most likely explanation for this unsettling event would be that somebody was dropping rocks out of airplanes.

Needless to say, I was very eager to get to the location to see this impression for myself. Coordinating with Will’s friend proved difficult between our various work schedules, and the soonest I could get to the scene was Sunday, September 13. I didn’t think it was an issue since the weather had been warm and cooperative. The impression would surely still be there.

Neither Will nor his fishing friend told the uncles that the footprint was there out of fear that they would be heckled, and then the uncles would go and fake a number of other prints in the beach. However, in the intervening four days, one of the uncles took his ATV out on one of his regular patrols and drove right over the footprint, erasing all trace.

That’s bigfooting for you.