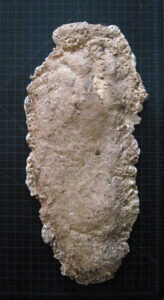 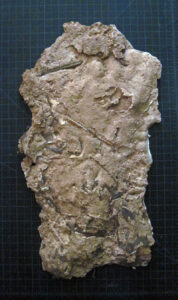 This cast was made while shooting an episode of Animal Planet’s Finding Bigfoot. The prints were discovered while on an on site investigation of footprints found several weeks before at this location.

The following are excerpts from field notes made by Cliff Barackman regarding the track’s discovery:

On February 16, 2011, just three and a half weeks after the initial footprint find, Ranae Holland and I met up with Jeff for an interview. He took us and the production team to the location, though we hiked in the easy way, which was still a mile or more of creek-bottom travel. With us was bigfooting production assistant, Tyler Bounds. He served us with scouting the area and keeping his eyes out for things that the production crew might not recognize as being sasquatch-related, and I wouldn’t have time to notice since I was working on camera.

We arrived at the location, not far from an excellent marsh where there were plenty of ducks. This is a key aspect to finding bigfoots: look where there is a superfluous supply of protein. The local sasquatches were more than likely using the water fowl as a food item while in the area.

While we were filming a scene near the place Jeff found the prints, Tyler ran up, pale and winded. I immediately knew something was up from the look on his face. It turns out he found footprints nearby, and they reportedly showed toes! We finished shooting the scene, and Tyler told me the general area where they were found, but not their exact location, so the production team could film the authentic discovery moment.

The location was in a silty water run-off at a turn in the trail. Water would run down the trail downhill to this location and spill out in this spot before going over the ledge into the ravine, or being soaked into the ground. It was this trail erosion that made this spot perfect for tracking, leaving a smooth layer of sand and silt from the path above to record the passing of anything that went this way. It was off the trail by 20 or more feet, and hidden by debris and brush. In this one spot were two footprints, both of the right foot. The two prints led towards a steep drop off into the ravine below. The ground was covered by sticks and other forest debris except for a few square feet of sandy substrate.

Each print was measured separately, and with interesting results. The footprint measurements varied from foot to foot, which suggests that they were left by a living foot, not a fake wooden “stomper.” We only had one foot represented in the two footprints since both prints were of the right foot. The left footprint was not found in the thick forest duff. Measuring from the toes of the first print to the toes of the second gave a stride length of seven feet. This was identical to the hypothesized stride length of Jeff’s original footprints. Jeff also noted that these were just about the same size as the prints he initially stumbled on a few weeks earlier. It was entirely possible that these prints were left by the same individual and at the same time.

I put great care into documenting these footprints. From the moment of their discovery until we removed the casts from the ground, at least four hours had passed. This amount of care should always be taken with casts. Sasquatch footprints are very rare, and casts even more so.

Dr. Meldrum has had an opportunity to examine the casts and has come to the conclusion that they were possibly left by a black bear.  Here’s what he had to say:

“The principal concern I have is the appearance of the heel. It is remarkably tapered (sasquatch fps are noted for broad rounded heels) and there is a crease and then a deeper impression forward. This looks like the hind paw impression of a bear, with a separated calcaneal and metatarsal pads. The toes of the hind paw are not clearly imprinted, except for possibly a digit or two. The asymmetrical bean shape of the fore paw is evident, as is the correlation of the toes — the wider side of the pad is on the outside, as is the larger digit. The size is within the range of black bear.”

I wrote back as follows:

I didn’t see the GA prints as coming from a bear, but that would explain the pointy heel.  I was actually concerned that they might be human.  I have since discovered that a barefoot jogger was frequenting Bull Mountain around that time.  Whether he’s a hard-core barefooter, or one of those guys who wears those cursed Vibram toe-shoes, there is a possibility that these prints, as well as the ones the witness found in January, could be from him .I would have to wonder, though, why he was jogging into the ravine.  That’s no place for someone to go barefoot.

Attached is an outline of what I was concerned about.  Sorry about the shaky lines, but you get the point, I’m sure.  If I put my heel at the corresponding point in the print, the size and shape match very well to the cast.  I wear size 10 shoes.  However, both casts measure about 14.5 inches, so if they are human, what made the extended impression at the ‘heel?’  Then we go back to bear.
One interesting note about the print find…  On the walk in, there were several distinct knocks from the two overlooking hillsides.  The seemed to answer each other.  They were in groups of ones and two, and only happened a couple times as we walked through the river bottom.  One would knock from the left hill, then a second or two later, an answering knock would happen from the right hill.  Interesting, but inconclusive, as usual.
Bear, human, or sasquatch, this is still a great learning opportunity.  I’m enjoying the process, and I’ll keep on sending interesting stuff your way until you ask me to stop.
Thanks, 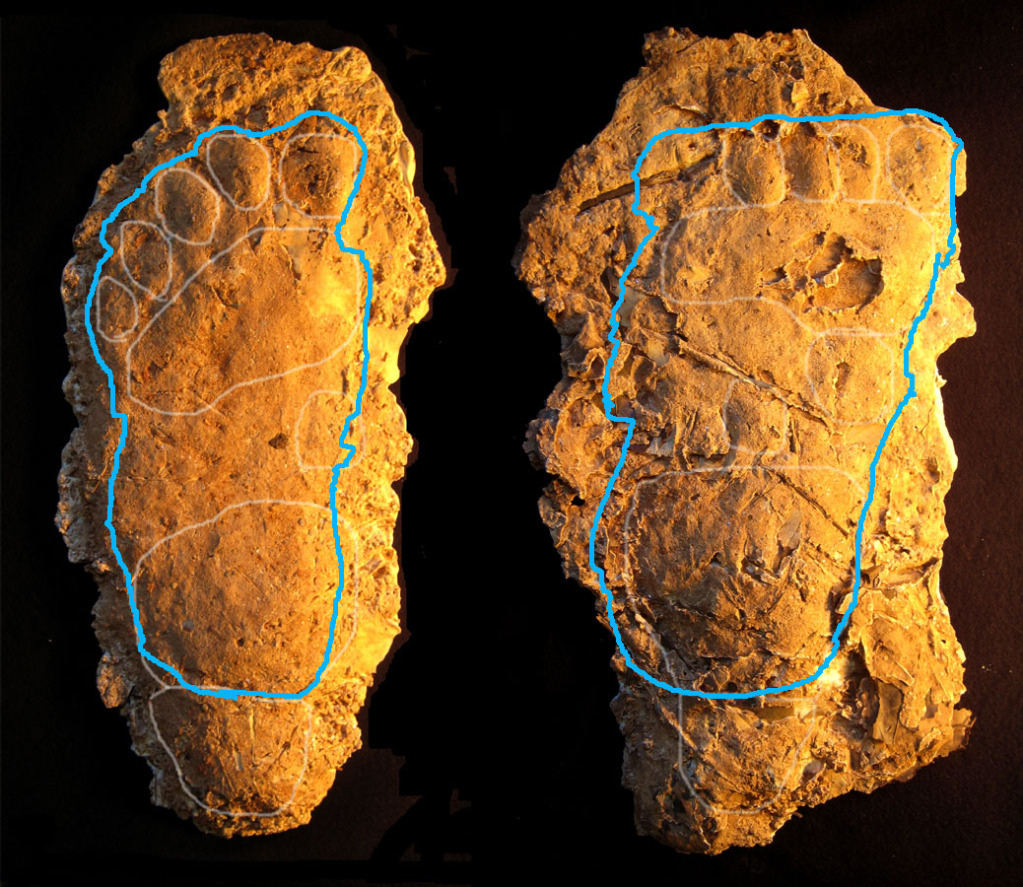 “Interesting tracks from Bull mountain.  The toes do have that look of those toe shoes  — but 14-inches?  Then again there is no scale in the picture.”

And more from me:

“The witness, Jeff, included no scale in the photos.  However, he said that his entire boot could fit inside the outline of the print.  I measured his boot (he was wearing the same ones when we met up with him), and it was 13 inches long.  That is what gave the estimate of 14 inches.

When Jeff saw the prints that I cast, he stated that they looked just like the ones he found that day.  The size apparently was very similar, which again supports the 14 inch estimation.”
So there you have it.  Bear, human, or bigfoot?  I don’t know.  But I do know that I am glad I cast them.  Upon seeing them, I knew they were the best prints I had seen in the ground, and I said as much.  I have been depicted as saying they were the best prints I had ever seen, but how can that be true when I’m aware of the Heryford casts, the Titmus casts, and several other excellent examples?  I can honestly say that they were the best I had seen in the ground.

If I hadn’t cast them, I would still be saying that I absolutely cast bigfoot tracks that day.  Upon closer examination of the casts themselves, there is now some doubt.  I don’t mind a bit, as  I would rather have the truth out there than to have a “feather in my cap” that I cast good prints.

The lesson to be learned from this is that any bigfooter should cast all prints that he/she finds, even if they don’t seem very good.  I have been fooled by a double stepping bear on another occasion in Bluff Creek back in the early 2000’s.  It was only because I cast the prints that I was able to discern that they were bear.  It was a great learning opportunity.  This is too, though I am not 100% convinced of the bear hypothesis.  Still, Jeff is the footprint expert, and his opinion carries a lot of weight with me.  I appreciate the opportunity to enter this level of discourse with him.