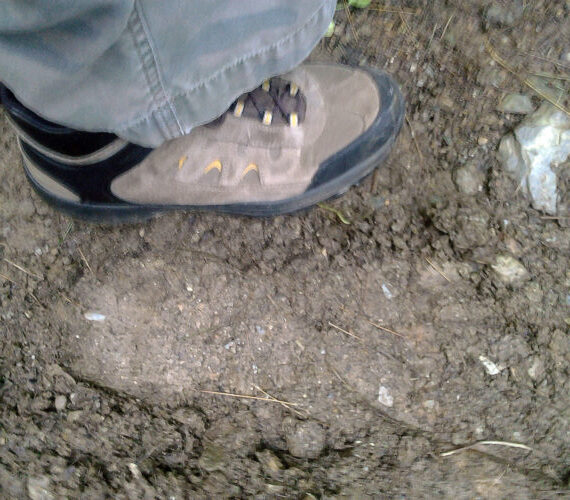 This footprint was discovered at around 10:15 am by the witness while on a morning hike with his church group.  On their way back to the trail head they ran across this footprint that was not there on their way in.

The trail, which is about four feet wide and firmly packed, winds through a hilly mixed forest full of rhododendrons.

The boot in the photograph is 9.5 inches long (as measured by the witness), and this was used to calculate the footprint’s length and widths.

Though much of the medial edge of the print is unclear, the heel is very pronounced and wide.  There is no indication of the constriction that would imply a longitudinal arch as is found in humans.  The fourth and fifth digits are visible in the photograph, though the other three are unclear, at best.  The lateral edge of the foot shows a nice curve between the ball and the heel sections, and this curve is further forward on the foot than would be expected in humans, but is nicely congruent with the data set of bigfoot footprints.