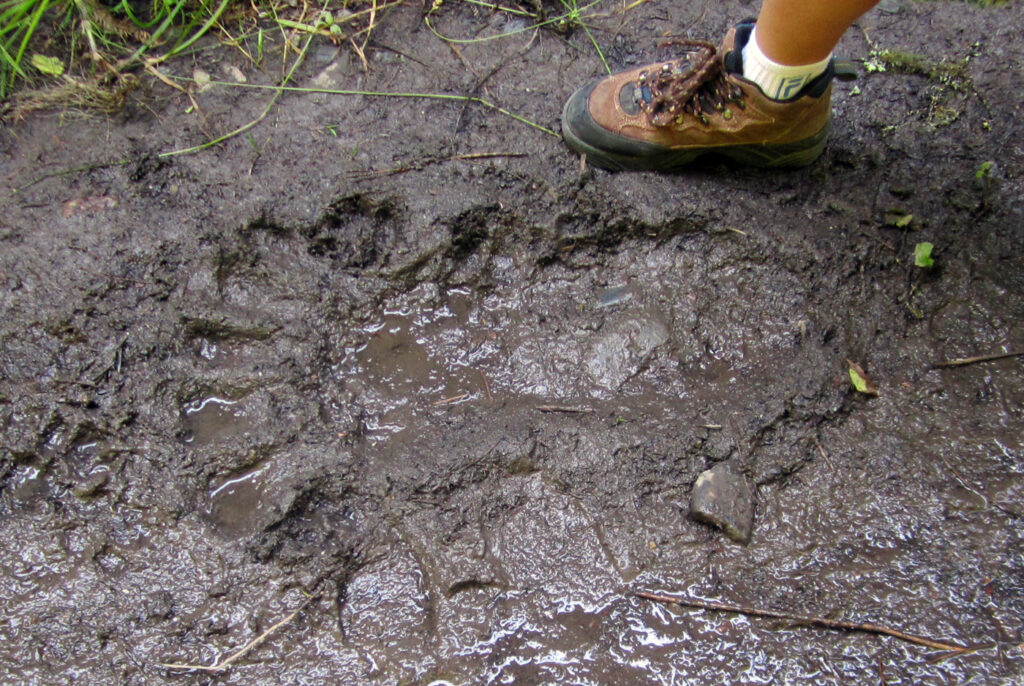 I received an email from a professor at the College of the Redwoods in Humboldt County, CA notifying me of a recent print find in Arcata Community Forest near the campus of Humboldt State University.  After a bit of emailing back and forth, I managed to speak to the witness about the find, but not before more than a week had passed.  She told me that she was walking on a path with her family when she discovered the footprint.  Her children were making bird sounds and playing while they walked.  The footprint was noticed on their walk out of the forest, but she doesn’t know if it was there on her way in or not.  It is possible that she just didn’t notice it.  There was another less-defined footprint one step length away, but the distance between the two footprints was not noted.

I expressed disappointment that the print had not been cast, and the witness notified me that she had been walking on that same path that same day and the print was still there, though in a bit worse shape.  The witness even offered to purchase plaster and cast the remnants for me on her own dime.  Unfortunately due to the rocky substrate below the mud, the cast broke in several pieces upon removal from the ground, and some of the pieces were utterly destroyed and/or left at the location.  The witness shipped the remaining pieces to my home for my examination.

While the cast does not offer much information, the footprint photo shows some interesting features.  The toes are very widely splayed and are quite long.  They impressed an inch into the muddy substrate, and the toe pads are flattened where they compressed against the harder gravel road below the mud (as seen on the cast).  The heel is not as deeply impressed as the ball of the foot.  A large rock was stepped on and can be seen impressing into the forepart of the heel section of the foot impression.  Interestingly, the toe pads are more deeply impressed than the toe stems, which in turn are not as deeply impressed as the ball.  This suggests either a curling of the toes as if grasping the substrate, or a push-off from the toe tips.

The footprint bears a striking resemblance to a footprint cast on November 3, 1987 in the Mill Creek Watershed outside Walla Walla, WA.  The toes of this cast are also widely splayed, and the ball and heel are also of very similar shape.  The similarities are so great that I had to consider if this cast was made to make the impression in Arcata.  Upon closer scrutiny, there are enough subtle differences, most notably in the lengths of the fourth and fifth digits, that I do not think this is the case.  Also, this would not explain the second footprint.

The location of the print find gives rise to suspicions that the footprint was planted by a hoaxer.  While this is always possible, there have been other incidents reported from this forest.  Another professor reported that one of her students was chased out of this same area a few years back by something she claimed was a bigfoot.  The event scared her so bad that she left Humboldt for good and never returned.

It makes sense that a bigfoot might find itself in Arcata Community Forest.  There are power lines running directly through it that connect to the Mad River/Blue Lake area, which has a long and consistent history of bigfoot activity.  Nearby Fickle Hill has numerous orchards on it, and at the time of year when the print was found the trees are just starting to bear fruit.  As can be seen in satellite photos, the area is just the tip of an unbroken green belt that continues literally for hundreds of miles offering more than ample room for bigfoots to move about freely.