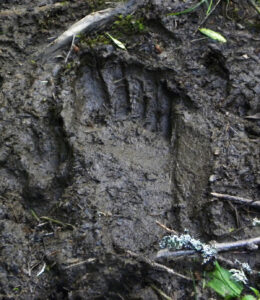 This footprint was found and photographed by Stephane Marier on Mount Gosford, very close to the Maine border, in July of 2013.  Stephane had walked a muddy trail for an hour or so before finding the single footprint.  It showed interesting detail including possible toenail impressions.  The photographs were sent to various researchers, including myself, to see if a consensus could be reached about what their possible source could be.

It was entertained that the print might have been made by someone wearing Vibram shoes.  I find this unlikely because of the lack of the Vibram logo in the mid part of the foot.  The witness noted the clarity of the footprints, including possible toenails, so certainly the logo, or at least the tread pattern on the sole would have been impressed into the mud.  None was seen in person, and none are seen in the excellent photographs of the print.

Though bigfooting is not a popular thing to do in Quebec, Finding Bigfoot is aired on the local Discovery family channel, and is overdubbed in French.  There have been other bigfoot reports from the area, and indeed the local geography has indications of bigfoot presence as well.  Local geographical names include Devil’s Mountain, Windigo Lake, and Windigo Falls.

After the footprint was found, the witness returned the location to leave out bacon and see what else could be found.  Strange noises were heard throughout the night, and something passed his video camera with a “huuu” sound.  The witness admits the terrifying night could be the product of an overactive imagination, but the reality of the footprint is undeniable.