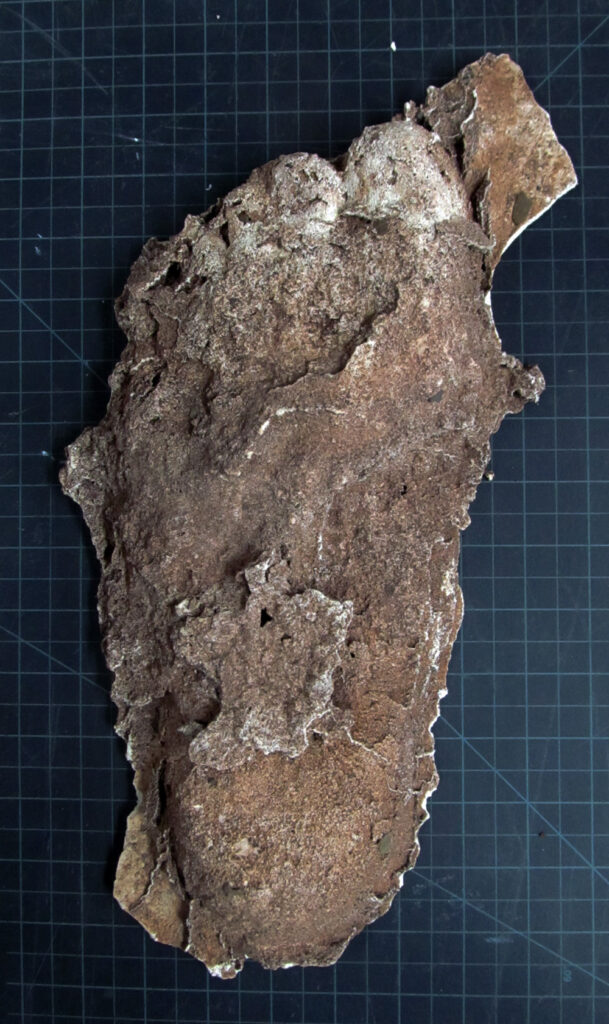 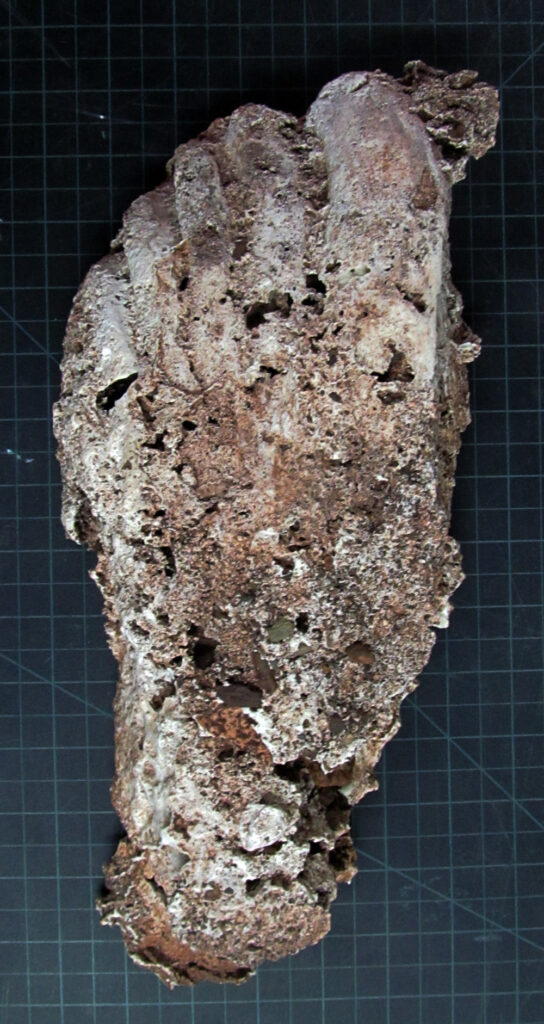 These footprint casts were unknown before Finding Bigfoot filmed an episode in the Four Corners region.  Johnny and Carol Willeto came to our town hall meeting in Durango, CO and shared their find with us.  Of course, I wanted to know more, so I jumped at the chance to investigate.

During the summer of 2013, strange animal vocalizations were heard on many nights outside of Tsaile, AZ on Navajo land.  The morning after one of these nights, some local people found a very long trackway of large, barefoot prints.  The prints would not have been possible if it wasn’t for a heavy rain the night before.

The trackway came out of nearby Canyon del Muerto and went to the edge of Tsaile Lake.  The prints then went into the lake and back out.  The shoreline where the prints came out of the lake was littered with pieces of a fish carcass that was half eaten (it was a catfish, if I remember right).  From there, the trackway led north through the desert along a shallow ditch paralleling the road a hundred or so yards to its east.  At one point the prints turned on a gravel road which led to a forested mountain area to the east where the trail was lost.  In all, the trackway was followed for close to two miles.

Many people in the community saw the footprints, and there was very little doubt as to what left them.  When one combines the previous night’s frightening vocalizations (a common occurrence that summer), the size of the footprints, the distance between them, the dead fish on the lake shore, and the fact that the track maker was barefoot for over two miles of difficult, prickly, pokey walking, the only conclusion that can be arrived at is that a sasquatch made the prints.  For the Navajos seeing these prints, there was no doubt.  Soon after the discovery of the footprints, several people in the community observed sasquatches nearby, and their sounds continued to be heard periodically throughout the rest of the season.

The trackway reveals some interesting behaviors of the sasquatch that made it.  It emerged from the roadless area of Canyon del Muerto and led to Tsaile Lake where it entered the lake to catch a fish.  One can speculate that this might have been a regular stop on its rounds, especially if fishing with one’s hands could score a fat meal with ease.  It discarded the leftover fish on the shore before heading north.  The path it took was not on the easily-traveled dirt road, but rather in a shallow ditch about one hundred yards to the east of that road.  The track maker would be exposed during this leg of its journey, so this ditch would be the only cover offered at this point (besides the cover of night).  If a human was encountered along this stretch, it would almost certainly be on the road whether he/she was in a car or on foot.  The sasquatch would simply have to drop down on all fours to stay out of sight.  Once past this open area, the creature simply took a graveled off-shoot road to the mountains and forests just east of the location.

It should be noted that in the Four Corners episode, Johnny states that he measured the distance between the prints to be 48 inches.  The step length should always be measured from one point on a foot the same point on the opposite foot, such as heel to heel.  Since Johnny measured just the distance between the feet, I added the length of the print (13 inches) to his 48 inches to derive a step length of 61 inches.  This large step seems to indicate the sasquatch was in a hurry to get out from the open area it had to cross.

The size of these footprints makes them of particular value to footprint researchers.  Large sasquatch footprints (say 14+ inches) are most represented in the data set.  There are a number of prints from juvenile individuals as well.  Least represented are sasquatch footprints in the 8 to 13 inch range.  This is probably because these are most easily confused with human footprints, so someone discovering prints in this size range might dismiss them as being nothing unusual. 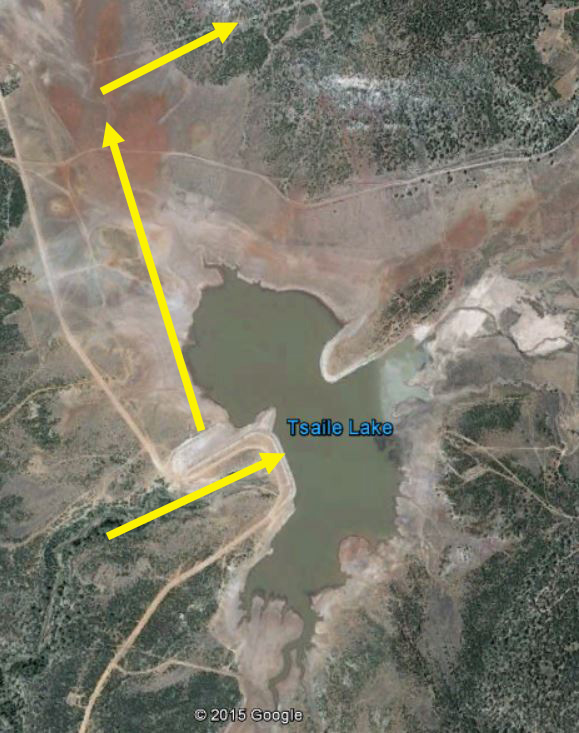 Three footprints were cast by Johnny and his wife, Carol.  One cast is better defined than the other, having the best shape and a complete heel.  The second cast is slightly longer due to the foot sliding into the substrate, but the heel impression was partially destroyed due to this same action, which makes the heel appear narrower than it actually was.  There was another print cast as well, seen below, that is just a long slide that shows little detail beyond the vaguest toe impressions and a heel.