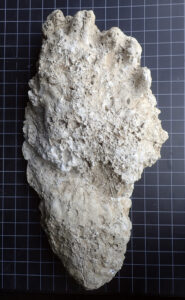 This large cast was collected by Tom Shay of the Northern Kentucky Bigfoot Research Group on April 23, 2014.  On this day, Tom was on an investigation to an area where local witnesses reported seeing “something huge” near their farm.  They also reported that several of their domestic animals had recently gone missing.

Upon investigation, Tom found several items of interest.  One item was a canine skeleton which had the neck broken and the ribs removed and stacked nearby.  Another was a trackway, which he followed.  At one point in a muddy area, Tom found a nearly perfect print and cast it.

Tracks from this same individual sasquatch have been found by Tom and his fellow researchers on several occasions in this area.  The size of the impressions influenced the researchers to nickname this sasquatch, “Goliath,” which seems fitting.

The cast is simply huge.  While the foot impression is around 19 inches, the cast is nearly 21 inches long.  There is likely some sliding-in of the foot based on the heel impression which would serve to lengthen the impression and exaggerate the toe splay.

The toes are indeed splayed dramatically.  What is interesting in this case is that several of the digits have quite a bit of vertical differentiation as well, which is likely due to the toes flexing upon push-off.  The hallux (“big toe”) impressed a full inch shallower than both the second and fifth digits, which impressed deeper than the other three toes by quite a bit.

Also of note regarding the toes is the second digit.  It seems to show a “double strike” where the toe shifted medially upon push-off compared to where it initially struck.  This toe also shows a dramatic overhang where the toe impressed into the ground, giving us a view of the vertical thickness of the toe itself (about an inch high)  Several other toes show this kind of overhang, but none so dramatically as with the second digit.

A large midtarsal pressure ridge is clearly evident in the cast.  The ridge is congruent with the expected shape of such a feature in that it shows the respective lengths of the metatarsals of the foot with the first metatarsal being longest and the others decreasing in size from the second to the fifth metatarsal.

The cast was lent to me for cleaning and copying.  While I was cleaning it, I noticed at least two patches of possible dermatoglyphics.  One patch was on the medial side of the hallux and the other was on the lateral side of the fourth digit.  The markings show small parallel lines spaced further apart than my own fingerprints.  They do not show up as well on subsequent copies of the cast, but the are clearly visible on the original (which has now been returned to Tom).

Unfortunately, several spots on the cast show that the impression was touched before casting.  There are marks that show finger tips and partial human fingers, so the above mentioned dermatoglyphics cannot be absolutely identified as sasquatch dermatoglyphs.  They could be human, though I noted that they are spaced more widely than my own.

Skeptics might suggest that these finger markings show that the impression was sculpted by a hoaxer.  While I suppose this is possible, I doubt this to be true.  The location of the trackway was not known by the witnesses when Tom came for the investigation.  The impression itself is very deep and shows remarkable details in toe depth, toe variation, and has an anatomically correct midtarsal pressure ridge.  As far as Tom Shay goes, I trust him completely and have never had any reason to doubt his honesty and integrity.  I judge this cast as legitimate, but simply was touched prior to casting, possibly to remove debris.