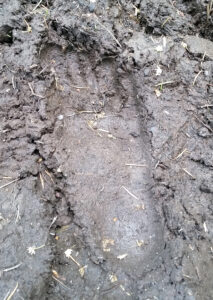 A woman and her husband set out to hike the Munra Point Trail in the Columbia River Gorge just west of Bonneville Dam on the morning of May 10, 2015.  It was an early hike so they saw nobody on the hike up, but passed two hikers on the way down.

The woman is interested in tracking and was looking for animal prints on the trail.  The footprint was not seen on the hike in, but was found on the way out.  There were few areas where prints would register in the hard-packed trail, so it seems possible that the print was made that very morning while the couple was hiking.  Only a single print was found.

The muddy area where the print was found was about two feet or so on each side.  The impression was between 0.5 and 1 inch deep, and impressed more deeply than the boot print which can be seen next to it.