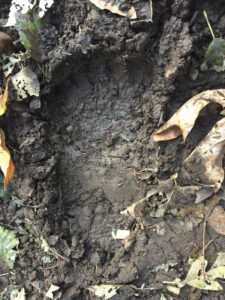 On November 5, 2017, an elk hunter drove up Hillockburn Road towards Goat Mountain to check out an area he often hunts.  While walking a trail in the area, he encountered one footprint in the dirt, yet going perpendicular to the trail itself.  The hunter photographed the footprint, and casually put his own boot next to it for some sense of scale.  He told me the print was about an inch or so longer than his boots, which he later measured at my request.  The boots were 13.25 inches long, which puts the footprint right around 14.5 inches long.  Using this length estimate, the widths of both the ball and the heel can be estimated at 6 inches and 5 inches respectively.

The hunter told me he frequents this area during hunting season, and he found another possible footprint back in October, 2015.  At the time, he talked himself out of the impression being a bigfoot footprint because that footprint was much less defined, and besides, “bigfoot isn’t real.”  After finding the beautiful footprint in 2017, he is beginning to think that print from three years ago was probably from a sasquatch as well.  The witness said that he may have a photograph of the 2015 footprint on another phone, and if he digs it up he will send it to me.

As can plainly be seen in the photograph, all five toes are present and clear.  The fifth digit has an interesting abduction showing excellent splay.  Just behind the halfway mark on the print is a slightly raised mound of dirt that clearly indicates the midtarsal pressure ridge that is often found in real bigfoot footprints.  It is worth noting that the ridge is slanted upwards from right to left, corresponding to the diagonal layout of the base of the metatarsals that cause this feature in impressions.  This is truly a photo of a  textbook footprint.  I just wish the impression was cast!