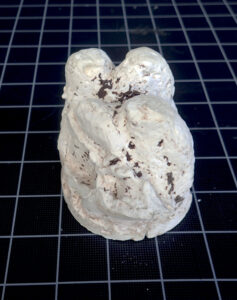 In July of 2017, Tom Shay of the Northern Kentucky Bigfoot Research Group and another of his research partners, Steve Cornell were working on a method to obtain sasquatch hair samples from one of their local bigfoot areas.  Steve designed a prototype of a hair trap consisting of a large PVC pipe and sandpaper.  Inside this device was placed a jar of unopened Nutella, the chocolaty breakfast spread.  The jar had the lid screwed on and the tamper-proof seal still intact.  The trap was strung up in a tree high above the ground and left for about a month.

Upon returning, the trap was disturbed from its original location in the tree and left hanging in nearby branches, but with no hair trapped in it.  The Nutella jar was found on the ground between ten and twenty feet away, and uphill from the trap.  It had been unscrewed and opened with the lid left off.

Looking inside the jar to see if anything had been disturbed, Tom found what appeared to be four impressions resembling large fingers impressed into the Nutella inside the jar.  He put the jar into a cooler for the ride home in hopes of somehow preserving this potential evidence.

As it turned out, the Nutella hardened pretty well on the ride home in the cold cooler.  Tom then decided to freeze the jar and cast the impression while the Nutella was frozen hard.  It was a brilliant move, and one that should be used by other researchers in such situations.

The resulting cast, though difficult to clean, shows what are plainly four fingertips.  It’s difficult to tell which fingers the impressions represent.  It is also entirely possible that the four impressions represent marks left by three fingers, with one finger making two impressions as it struck twice in the Nutella.  I lean towards the latter of the these configurations because the two fingers seem to bend in the same direction, but interestingly am unsure about which of the two outlying digits would make the most sense being the thumb.  The flexing directions of these outlying fingers is not clear, leaving the issue one of speculation.

The impressions made by the fingertips, including the possible fingernails, indicate a grabbing and scooping motion by the fingers upon removal.  (Remember, the impression is not the shape of the fingers, but the shape left by the motions they made while impressing into the Nutella.)  This was noted by Tom Shay upon his initial inspection, and is supported by the cast itself.

The round, tubular shape of the fingers is readily apparent when contrasted against parts of the impression that were Nutella scraped out of the jar.  The shape of the bending at the joints of the fingers is also clearly seen.  The fingers, though more or less human-sized, seem to be spaced much more widely apart than my own.  Tom demonstrates this in a video from his Youtube page.

Overall, this cast is intriguing due to its novelty.  Not enough morphology can be discerned to compare it to other hand casts on record, but the details that can be seen make it a fascinating specimen.  Since no footprints nor hair was collected at the site, it cannot be said with certainty that the impression was made by a Nutella-hungry sasquatch.  However, I feel this is likely because of the past activity of the area, the fact that this was private land making trespassers unlikely, and the strange circumstances upon finding the jar nearby and uphill from the trap.