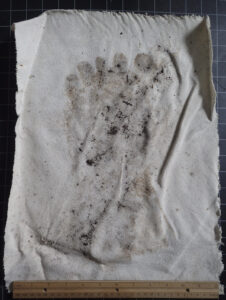 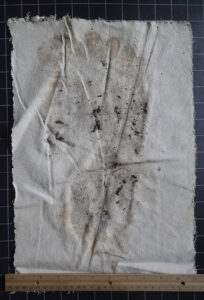 This saga started when I checked my email on the morning of February 16, 2018 while in Nebraska for the 2018 Nebraska Bigfoot Conference.  An email written at 11:08 pm the night before had the subject heading of “Tracks found today.”  I opened the email and found that a friend of the email’s author had located and photographed footprints on an old discarded futon mattress at a pull out along Oregon Route 36.  Exasperated, I thought to myself, “Why do all the really cool things happen when I’m out of town!?”

The photographs were very interesting.  One of them had a lighter as a scale item showing that the prints were not huge, but were likely larger than most human prints would be.  The toe splay was very impressive, as was the prints’ widths.  They looked very good to me, which got me very excited about the find.

I had a professional obligation to speak at the conference, and I wouldn’t be flying home until Sunday, February 18th, two days later.  I checked the weather report and saw a storm was due to hit Cheshire, OR the next day.  Rain and snow were coming, so I started making phone calls to find somebody to go get the footprints.

My first call was to one of the best bigfooters I know who happens to live in the general area, Chris Minniear.  Chris immediately knew the importance of the find, and spent several hours that night after work going to at least six different pull-outs trying to find the location of the mattress, but to no avail.

I encouraged Chris to speak directly to the reporting witness in the morning and to try again.  This time, he was successful in locating the site.  Ironically, the mattress was just a few miles from his home, and he had been passing that same mattress at least twice a day while commuting to and from work.  He and his wife had actually complained about the mattress and the lack of respect it shows to throw one’s trash on the side of the road for others to deal with.

Chris videoed parts of his investigation at the scene, took a series of photographs and cut the footprints out of the fabric of the mattress.  He then stored them in brown paper bags and kept them in his heated home to avoid mold or mildew destroying the prints and/or fabric.

The weather that week was simply terrible.  The rain and snow alternated, making for treacherous driving conditions, so I was unable to make it to the location to check it out for myself for a full week.  Finally, I drove down with my wife, Melissa, Thom Powell, and my dog, Xochitl on February 25th.  We located the site and carefully searched the area for an hour or more.  I located one mark in the ground that was located where the next foot coming off the mattress would likely have fallen, but it was hardly more than a scuff with no depth.  Casting it was out of the question, but I did photograph it.

The footprint swatches are now safely in my possession and on permanent display at the North American Bigfoot Center in Boring, OR.

There are some very interesting details to be seen in the photographs taken and also in the footprints themselves.  First, there was noticeable deterioration in the quality of the marks on the cloth between the time the original witness documented the footprints and when Chris arrived on the scene just two days later.  The rain seems to have really washed out much of the soil on the mattress.

The footprints had some depth to them in the mattress showing that weight was pressed down on the surface of the futon.  This in turn lifted the mattress material adjacent to the impression which seems to have resulted in possibly recording hair striations from the ankle area onto the mattress.  In the photographs below, note the dirty marks above where the ankle should be.  There is a sharp line heading up diagonally to the right showing a fold in the fabric.  Below it, particularly on the left side below the fold can be seen parallel lines suggestive of hair.  It is also possible that these lines are simply the sides of the feet leaving parallel marks as they are removed from the impression sliding upwards.

More parallel marks are seen in the photograph below taken by the reporting witness.  In this case, however, those parallel lines are seen all around the heel area radiating outwards from the foot.  It cannot be said if these marks were caused by hair striations or just the removal of the foot.  Still, it is an interesting possibility. 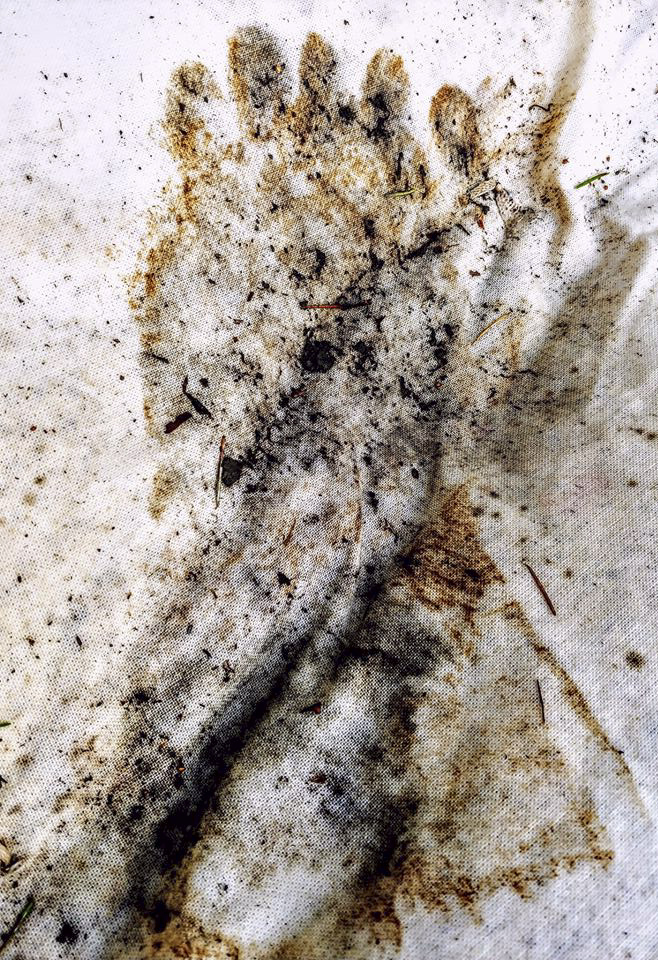 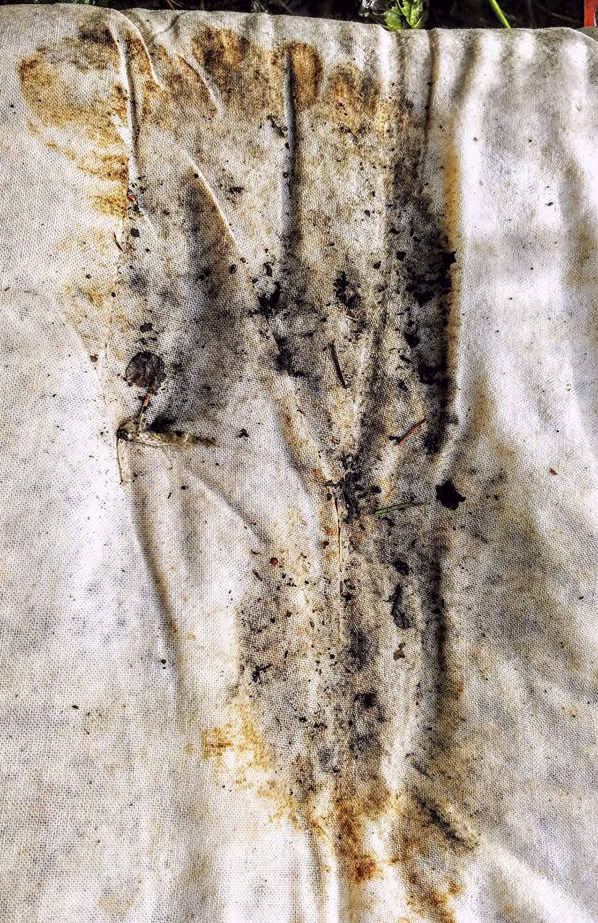 From some angles in which the depth of the impression is easily seen, there seems to be indications of mid-foot flexibility.  As is well-documented, sasquatches push off from the base (back part) of their metatarsals, as opposed to humans who push off from the heads (front part) of theirs.  The depth of the footprint into the mattress, as well as the wrinkle raised from the force of push-off while walking suggest this is also the case with the track maker in this case.  The forepart of the foot is even a bit darker, suggesting more force might have been put on that part of the plantar surface upon push off.

The toe splay is quite wide.  The fifth digit in particular stands out as being quite adducted (not in line with the rest).  The hallux, or “big toe,” in the right footprint appear unusually wide, but really isn’t.  This is just a consequence of the mattress fabric folding over as the weight of the track maker impressed into the cushion below.  When it folded over, it touched the medial side of the foot and recorded marks from that side of the toe, thus making the marks appear wider than they are.  Remember, whether it’s a footprint or an impression, it is not the shape of the foot, but rather the shape of the damage done to the substrate (in the case a spongy mattress with a loose fabric cover) by the foot as it walks by.

The footprints do not appear to be human in any way.  They are rather long, though admittedly not outside the variability of some humans.  However, when feet grow to be this long, they are always quite narrow.  For example, I photographed and cast footprints from Oregon’s second-tallest man who I met while filming Finding Bigfoot.  His footprints were about 13 inches long, which is the approximate length of these footprints.  However, while the ball of his feet measured only four inches wide at the heel, these are 5.5 inches.  That’s an increase of 37.5%, and far beyond the realm of human.  The heel in this case also is much wider than in that particular human’s prints by nearly 17%.

The fact that both feet are represented is very fortuitous.  It would have been nice to have multiple examples from the same foot so to ensure toe variability and the like, but we can be thankful for what we have.  Indeed, we are lucky to have been able to record any of this considering the weather conditions and the circumstances.

To my knowledge, this is the only example of footprints being removed from a site on cloth or similar material.  There have been other situations where muddy marks have been left by a passing sasquatch, but none that have been collected and brought back for others to examine.  If there are other examples of this out there in the data set, I would very much like to know about them so a comparative analysis could be undertaken.  Please email me with any such information you are aware of.