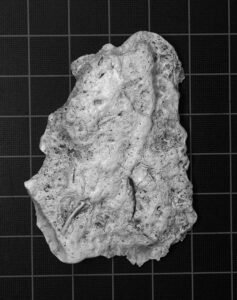 On April 18, 2018 the witness, a surgical technician, and his mother were mushroom hunting in Owen-Putnam State Forest in Owen County, IN.  The Owen-Putnam State Forest is steep terrain full of ravines, boulder outcroppings, but criss-crossed by logging roads.  Because he didn’t want his mother to have to struggle too much over difficult terrain, he took her to a flat bench area to hunt the mushrooms.  This area also had the added benefit of being quite remote with few, if any, visitors.

The shelf-like bench area where the duo hunted mushrooms turned out to be blown out by the recent weather.  The small creek flowing through the area flooded and pushed out much of the leaf litter that normally lined the forest floor and muddy sand bars along the river.  The witness crossed the creek, walked down the stream bed a short ways, and doubled back towards the vehicle in a U-shape.  His mother stayed in the original area and looked for her quarry nearby.

At some point on the way back to the car, the witness heard a branch snap.  It was the sound of an animal moving nearby, not something dropping from a tree. He never saw what made the noise, and wasn’t even sure it was relevant to the story, but offered it me during our interview anyway.

On the way back to the car, the witness stepped into a washed out area of the creek bed and saw what appeared to be a very small human footprint in the mud.  He has over 30 years of experience hunting these woods and considers himself a good tracker.  He gauged the weather from the previous week and realized that the print must have been made only a day before at most, and quite possibly that same day.  This was the only print visible, though the nearby substrate would not have recorded anything’s passing.  He returned the next day with plaster of Paris to cast the footprint.

Southern Indiana is excellent bigfoot habitat, and the area in which this footprint was found indeed has a history of other sightings and encounters.  Mushroom hunters had previously seen sasquatches in the immediate area on at least two different occasions.  Other sightings have been reported in nearby Clay County from just a year or two before.

The cast is a bit vague, and all possibilities should be explored before assuming it is a juvenile sasquatch print.  The most likely alternative if this is not a human or sasquatch footprint is that it’s a washed out deer track.  The only species of deer in the area is the white-tailed deer (Odocoileua virginianus). According to Mammal Track & Sign by Mark Elbroch, the front foot of this species can reach up to 4 inches in length, and indeed that is the length of the “foot” in this cast (much of the cast is actually overflow from the casting process and not the shape of the foot itself).  However, missing is the cleft between the two hooves along the inside hood walls.  While white-tail prints are slightly asymmetrical, not to this degree.  One side of the print is missing altogether if this was a deer print.

Since human-like toes are faintly visible in the track, another possibility is that the track was left by a small black bear (Ursus americanus).  However, this option doesn’t really hold up as a possibility due to the shape of the foot, let alone the scarcity of bears in Indiana (according to the Indiana DNR’s website, there have been three confirmed bear sightings between 2015 and 2018, but none between 1871 and 2015).  If it’s from a bear, then it was a back paw that made the impression.  However,even a quick glance at this cast next to a similarly-sized bear track shows too many discrepancies to be a good match.  The bear cub print has a pointed heel like those of adult bears, while the cast in question shows a rounded heel.  In the bear cub print the toes are curved around the front of the pad, while in the unidentified track, the toes slant downward to the left from what appears to be a big toe. The bear model doesn’t fit well with this cast and can safely be ignored.

Another possibility is that this footprint was left by a human.  The size of the impression would indicate that the track maker, if human, was very young, perhaps even a toddler.  No other human footprints were found in this remote spot, despite having some very good tracking substrate along the blown-out creek bed.  It seems unlikely that a bare-footed toddler would be out in this remote section of State Forest alone.

Examining the cast in the light of it possibly being a sasquatch print makes some sense, despite the skepticism and doubt that should accompany that interpretation.  The shape of the print was immediately seen as human by the witness who has over three decades of experience hunting and tracking in this area.  It was the human-like shape that drove him to come back the next day with plaster to make a cast of this unusual print.  The toes on the cast slant downwards sharply as is seen in many sasquatch footprints of various sizes from juvenile to adult.  In fact,there is another cast of a purported sasquatch print of similar size from Michigan that shows this same slanting-toe feature.  The heel is nicely rounded and wide, and the ball of the foot is even wider, flaring out on both sides, much like another cast collected in Washington of a foot of similar size.

It cannot be known for certain that this cast is from a juvenile sasquatch. However, observations of the cast reveal features such as toes, toe slant, and plantar surface shape that don’t easily match the footprints of any other animal known from the area except humans, and this can be discounted as a possibility for the reasons above.

If this is a juvenile sasquatch print, what can be learned from it?

It has been hypothesized that a juvenile sasquatches might sometimes be left in remote areas with access to abundant food and water while the adults busy themselves with whatever it is that bigfoots do.  I first heard this idea from a Yurok man in Northern California, and my observations since support this as to be likely true.  I call those locations “nurseries,” but I’ve heard other researchers refer to them as “cribs.” Either way, the idea may be a good model. Could this spot where the witness located the track be one such nursery?

Remember that the witness took his mother to this specific location for several reasons.  First of all, the area is remote and rarely visited by anybody.  It was very unlikely that they were going to run into anyone there. Also, it was a large, flat area that made moving around easier than moving through the steep, difficult terrain elsewhere. This would benefit his mother while hunting mushrooms, but might also benefit a young sasquatch by allowing it to expend fewer calories.  I have found evidence of the presence of sasquatches on benches in steep terrain on several occasions, and I hypothesize that they were there for similar reasons.  Finally, the witness and his mother were hunting several species of edible mushroom. This, of course, means that food was likely present in the immediate area.

In conclusion, while I can’t say for certain this is a footprint cast of a juvenile sasquatch, I think it is an interesting possibility that seems to make sense based on what I’ve observed over the years.  The area is known to have had encounters very recently, as well as historically.  The size of the print is not unknown in the data set, though it is among the smallest on record with only two other known tracks available of that size.  It can be assumed that if this is a sasquatch track, the creature must have been very small, and probably still of the size where it is usually hanging onto its mother and being carried most places.