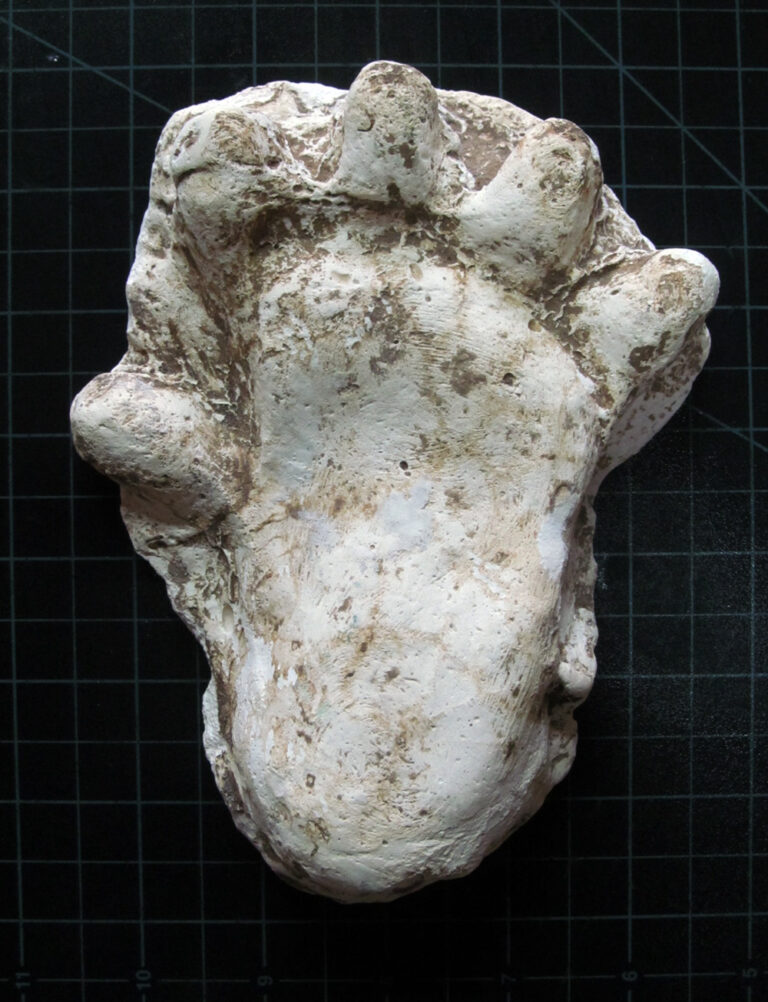 On January 12, 2013, evidence of the orang pendek was discovered by two men from Pauh Tinggi village.  While the creature itself was not seen, footprints were discovered, as well as where the creature rubbed its body against a tree, and also where the creature stopped to forage for grubs in a rotting log.  The tree was apparently not examined for hair samples, though my contacts have been instructed to look for such in the future.

Only one footprint was cast from this line of tracks, and it the first cast to be obtained by the Orang Pendek Project.  The cast is  a little over 6.5 inches long, 2.75 inches wide at the ball, and 2.5 inches wide at the heel.  The hallux, or big toe, is off to the side (abducted) as is the case with other apes.  This cast establishes that the 2001 Davies cast is NOT a handprint, as has been speculated by others before, but rather it is a footprint.

There is a strong indication of mid-foot flexibility in this cast.  Directly in front of where the hallux joins the foot is a slightly raised mound in front of where the base of the metatarsals would presumably meet the cuneiform and cuboid bones.  Having no arch, there would be some expectation that such a feature might be found in footprints of an ape like the orang pendek.

The toes seem to show indications of the “mushroom effect.”  This is when the digital fat pads impress into the ground and expand laterally outwards.  When weight is removed from the foot, the fat pads contract and are then pulled out of the substrate, leaving a concavity to the side walls of the footprint.  The outsides of the resulting casts show a rounded shape, due to the overhanging sides.  This strongly suggests that a malleable, living foot made this impression.