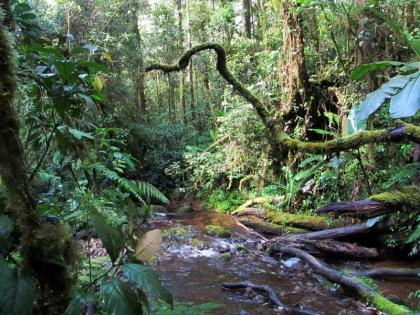 The area inside and surrounding Kerinci Sablat National Park is this project’s area of focus.  The local Sumatrans who are participating in the project all live nearby and are well-connected in their communities.  This enables them to quickly receive word of sightings, often arriving within one day of the encounter or footprint find.

Historically speaking, the Kerinci Sablat National Park has produced many sightings and encounters.  It was within the park borders that Adam Davies found and cast an orang pendek footprint in 2001.  To my knowledge, this was the second footprint cast of an orang pendek ever obtained, and it still remains to this day the best-known example. 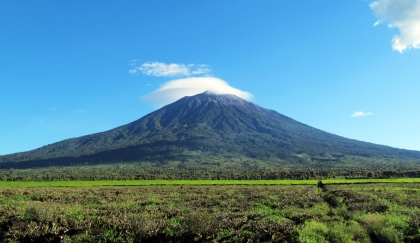 Kerinci Sablat National Park is a tropical jungle that encompasses almost 14,000 square kilometers (over 5000 square miles) throughout the Barisan Mountain Range of western Sumatra.  It was named for the highest peak in Sumatra, Mount Kerinci, which is within the confines of the park’s borders.

It is a highly volcanic region.  Hot springs dot the landscape, and Mount Kerinci itself is an active volcano.  The highest altitude caldera lake in Southeast Asia is within the park, Lake Gunung Tujuh, or the Lake of Seven Peaks.  It was in the Gunung Tujuh region where Adam Davies collected the footprint cast in 2001. 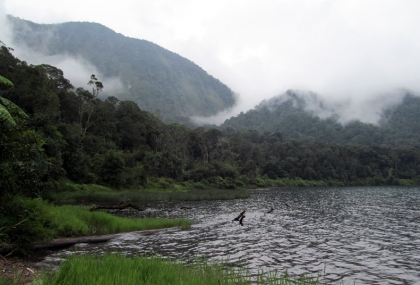 Together with two other adjoining national parks, Kerinci Sablat is recognized as a World Heritage Site.

Most of the data collected by the Orang Pendek Project comes from the areas surrounding the Kerinci Sablat National Park.  This is simply because there are so few people within the park itself.  Most of the sightings we investigate come from the farmers and villagers that make their livings on or near the outskirts of the park borders.  Sightings and footprints are often found either on farms in areas where crops are maturing, or by people collecting animals or forest goods from the jungle.