Over the years hundreds of bigfoot eyewitnesses have reported seeing what is described as glowing eyes. The eyes most often glow with a red color, but not always. Green, amber, blue, and even a scintillating mishmash of colors have also been reported. Some have suggested that bigfoots actually create this light with their own eyes with some sort of bioluminescence in order to identify or communicate with others of their own species. I disagree with this hypothesis for a variety of reasons.

While it is well known that many organisms create light with their own biochemistry, none of these species are mammals, let alone primates. The vast majority of bioluminescent creatures are invertebrates, but there are a few fish with that ability. There should be some other mammalian species that can do this same thing. After all, every other bigfoot behavior can be found in other species. The only reference I can find of any mammal having any sort of relation with luminescence was a paper published in the journal of the National Center for Biotechnology Information entitled “Spontaneous and Visible Light-induced Ultraweak Photon Emission from Rat Eyes.” This paper detailed the finding of parts of the eyes of rats that emit very weak light, seemingly emitted after “charging” by the higher energy photons passing through the eyes during normal vision. These ultra-weak photons, it is suggested, could be the source of what is called “discreet noise” in the eye, or sort of a visual white-noise. Still, this is a long ways from creating light at will from the eyes.

Besides the fact that no other mammal has bioluminescent abilities, there are other problems with this hypothesis. It seems to me that the light created inside the eye would blind the viewer. After all, if our ears emitted music, it would be difficult to hear beyond those sounds.

I believe there is another explanation more grounded in anatomy that isn’t dependent upon a totally unprecedented phenomenon in the animal kingdom. Bear with me while I explain.

First of all, sasquatch eyes are very large, which makes sense considering how large the creatures are overall. With human eyes being on average about an inch in diameter, bigfoot eyes should be at least 1.5 inches in diameter, or even larger. Keep this fact in mind while I explain a little about how eyes work.

Light enters they eye through the pupil, or the dark circle at the center of the eye. The colored part surrounding it, known as the iris, is actually a pair of muscles that expands and contracts the pupil to control the amount of light that enters the eye. The iris contracts the opening of the pupil in bright conditions, and widens it in the dark (expanding to about 9 mm in diameter) to allow as much light in as possible. The wider the opening, the more light can be gathered. This light is then focused on the retina at the back of the eyes which absorbs the light and sends the information the brain through the optic nerve. 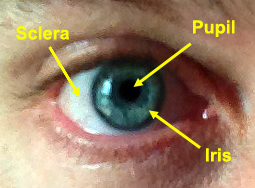 Most witnesses who encounter sasquatches at close range note that they do not observe the sclera, or the white part of the eye surrounding the iris. Some witnesses have noted a white sclera in sasquatches when the bigfoot glances to one side without turning their heads. This is important to note because some apes have dark scleras, making it most likely that witnesses are not confusing dark eyes for a dark sclera. Interestingly, humans also have a white sclera as well, and they are always readily visible surrounding the iris.

Since the sclera is not usually seen in sasquatches, it seems that the entire visible part of their large eyes is taken up by the iris (most often brown in sasquatches, but not always). Since so much of the visible part of the sasquatch eye is taken up by the muscles that expand and contract the pupillary opening (as compared to a human), it seems reasonable to assume that sasquatches might have the ability to expand their pupils far wider than humans can. Add this to the fact that their eyes are bigger to begin with, then they would certainly have a much more efficient light-gathering organ than we humans do. This alone would go a long ways towards explaining their excellent night vision. (There might even be more factors contributing to their excellent night vision, such as an increased number of rod cells on the retina, the presence of a tapedum lucidum, or even a different shape to the eyes, such as what is found in owls, that could increase the light-gathering abilities of their eyes even more.)

To illustrate how much of an effect a greater pupilary opening would have on the light-gathering capacity of the eyes, let’s do some math. The average human pupil dilates to about a diameter of 9 mm. This diameter yields an area of about 64.6 square mm. At twice the pupillary opening of a human (18 mm) the area of the pupil a staggering 254.5 square mm. That gives four times the amount of area light can enter the eye. It’s possible that the sasquatch pupil can open to even larger diameters than this, which would further increase its light-gathering abilities.

Now, let’s get back to the eye glow issue. Most, but not all, bigfoot eyeshine is described as red. Human eyes shine in flash photography with a red light because the flash is reflected off of the blood-rich retinas at the back of the eye. Perhaps the sasquatch eye is so efficient at gathering the available ambient light (even in very low-light conditions), that it can focus what little light there is on the retina and have some reflect back at the witness. In dark conditions, it wouldn’t take much reflected light to stand out against the black background, and would indeed appear to glow. (The reports of other eyeshine colors in sasquatches suggests the presence the reflective layer behind the retina called the tapetum lucidum, which is commonly found in nocturnal animals. However, the inconsistency of reports leaves this presence far from certain.)

The concern of sasquatch eyes glowing brighter and fading in the presence of a witness can also be addressed by the above hypothesis. One of the physiological effects of stress and/or fear is the dilation of the pupils. In other words, when we are under stress our pupils open wider. It can be safely assumed that some sasquatches experience greater stress when they are confronted with a human presence. It makes sense that their pupils would dilate, allowing even more light into their eyes to be faintly reflected off the backs of their pupils, thus increasing the red light seen by a witness. Stress reactions in sasquatches in the presence of humans is corroborated by the reports of them “smiling” or baring their teeth at a witness, which is a well-documented stress reaction in great apes.

While I leave open the possibility that bigfoots create light with their eyes, I believe the above explanation goes much further towards explaining the eye glow sometimes observed in sasquatch sightings. The onus is on the proponents of a hypothesis to find information and precedents that support their ideas. Only time will resolve this issue, and in the meantime we bigfooters have to get back to gathering more information that might sort out this issue, as well as many others about our favorite species.